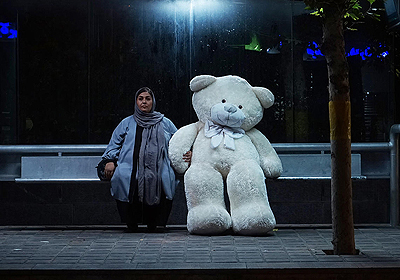 "it’s a unique and heartfelt, albeit slow-burning, examination of loneliness"

Set in Iran in the present day, Tehran: City of Love does not carry with it the overt political undertones that one might be expecting. Instead, it’s a unique and heartfelt, albeit slow-burning, examination of loneliness.
The three-pronged narrative follows a former champion bodybuilder trying to train a new protégé while trying to get a role in a somewhat mysterious film, an overweight beauty clinic receptionist pining for love who has fun using a sexy voice to entice men on blind dates and a religious singer tries his hand at performing at weddings whilst looking for love.

All three characters are in search of  something deep and meaningful that transcends the mere physical as director Ali Jaberansari employs subtle, visual motifs to emphasise a point. A brief touch, a fleeting glance or a simple expression carries with it so much from pain to sadness to a possible homoerotic idea in one brief yet memorable scene.

It’s often amusing and although it’s more of an examination of loneliness within Tehran rather than love per se, this could be viewed as an unconventional romantic comedy. Yet while icons of western culture may linger in the background of certain scenes, this is far from Hollywood.

Unfortunately the pace does ponder at times, and it’s never a good thing when a film of 100 minutes that’s telling three storylines feels as though it is dragging.

Yet this remains a bittersweet and well-meaning film that examines loneliness in a place where love could, and should, potentially thrive. And the final scene and closing shot are both things of stark, sad beauty.