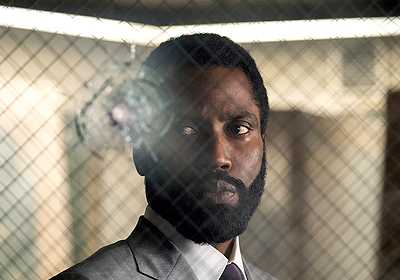 "a Nolan Time Bending Summer Smashouse of great performances, practical explosions all round and some of the most odd fight scenes ever"

It is no secret that I am quite fond of the works of one Christopher Nolan and I promise, hand on Heart, this has nothing to do with that one Christmas when I was working at the BFI IMAX, he came by to visit and I served him his popcorn and drinks for his family and friends. I got to shake the man's hand and told him how much of a badass he is and he was grateful to me for saying that.....wait....what was I meant to be doing again...oh yeah the 'TENET' review.... Let's do this.

John David Washington plays The Protagonist who is sent on a secret mission to stop Andrei Sator (Kenneth Branagh) a Russian billionaire who plans on using technology from the future for his own nefarious schemes. Using his abused wife Kat (Elizabeth Debicki) to get closer Andrei and with help from a new partner Neil (Robert Pattinson), The Protagonist is met with many twists and turns as he is thrown into a world FAR beyond his physical understanding and must try to adapt if he is to stop Andrei from executing his endgame.

OK, so the plot explanation was a little shorter then I usually like but TRUST ME the less you know going into this movie the better; yes this is your typical Christopher Nolan Summer Spectical 'OMG THAT IS AMZING' movie magic that Nolan (and ONLY Nolan) can create, as this man can't seem to miss a beat even when he messes with time which for me mostly in movies I consider a big no no unless you're using a Tardis or a Delorean.

Some very (VERY FEW) people (for some reason) took the typical nolan spectacle as a negative for this movie. I however as someone who LOVES The basic idea of the Summer Blockbuster and to quote Obi-Wan Kenobi...'That's....why I'm here'. It's CHRISTOPHER NOLAN!!! The man has made a reputation for stepping up almost every Summer since Batman Begins and delivering with something that's either a Phenomenal Trilogy based on a beloved comic book character (and I still owe Staci Lane Wilson a 1000 min word article on why I love those movies BTW) or an ORIGINAL story where he bends reality to his will whilst tugging at our heart strings with emotional indepth characters that you care so much about and let's not forget the incredible scores from Hans Zimmer and James Newton Howard.....'TENET' is another MASTERPIECE by the man himself.

The plot is Completely original, out right BONKERS and somehow WORKS. Brillantly casted, John David Washington is so witty and at times quite funny too. I liked Elizabeth Debicki and Kenneth Branagh's chemistry as I was convinced that they were a couple with a failed marriage but for me it's Robert Pattinson who steals the show here. Please understand that there is a DAMN GOOD REASON he was cast as The Batman and if the new trailer hasn't cleared any doubt in your mind about him being the Dark Knight then consider his performance in this movie the final nail in THAT coffin of doubts. The effects are great too especially when they decide to blow up a plane FOR REAL (No CGI for that one.)

Nolan took a U-Turn, a positive one for the score by Ludwig Göransson which was pretty amazing too. There is an issue with the sound mixing in the 1st 20 mins but considering it's a Nolan Summer flick you'll kinda forget that as the film goes on.

Now I can't strongly recommend the following enough... see this film in IMAX 70MM. It is WORTH spending the extra bit of cash as you're seeing it as Nolan intended it to be seen. I'd like to think that anyone taking the time to read this review has some passion and love for cinema as Nolan CLEARLY does, so you should treat yourself and see it as it's mean to be seen in GLORIOUS 70MM IMAX.

'TENET' is a Nolan Time Bending Summer Smashouse of great performances, practical explosions all round and some of the most odd fight scenes ever.