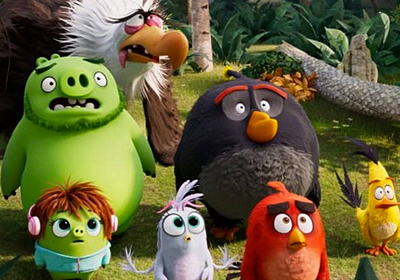 "a fun and engaging watch that you'll be glad you saw, it's fun for the whole family"

Building a narrative based on a popular game has always been problematic, there have been far more misses than hits over the years, and whilst The Angry Birds Movie 2 certainly isn't prefect, it is a good indication of where they'll take this franchise.

Whilst it can be said that this film franchise exists too far removed from the popularity of the Rovio Mobile games, The Angry Birds Movie 2, the follow up to 2016's The Angry Birds Movie, this time around directed by Thurop Van Orman, is none-the-less fun and engaging from start to finish.

So The Angry Birds Movie 2 picks up after the events of its predecessor, with Red (Jason Sudeikis) now revered as a hero, and he, Bomb (Danny McBride) and Chuck (Josh Gad) patrol 'Bird Island' and stop incoming prank warfare from 'Pig Island'. However, with the emergence of a third island that threatens the existence of everyone on the aforementioned islands, Red and head pig Leonard (Bill Hader) form an uneasy alliance to save their homes from imminent destruction at the feathered claws of the Eagles, lead by Zeta (Leslie Jones) and her powerful ice cannon.

The voice cast is brilliant; the returning cast of Sudeikis, McBride, Gad and Hader know their roles and joined once again by Peter Dinklage and Maya Rudolph and the welcomed new additions of Jones, Dove Cameron, Awkwafina and Tiffany Haddish, they seem to really relish their respective roles.

The key word here is fun, and for 96 minutes you'll have fun, there isn't much more to The Angry Birds Movie 2, although there are a couple of surprises that I won't spoil here.

All in all, The Angry Birds Movie 2 is a fun and engaging watch that you'll be glad you saw, it's fun for the whole family, not to the calibre of Pixar but it's up there, did we really need a sequel? I'd say yes, considering the direction it takes, employing more of the game dynamic (I don't remember an icy threat from Eagles in the games, but that's fine, maybe that was a later game!). I'd like to see another film in the series, now that they seem to have a formula that works, I'd be up for more. Thankfully, it's not another Emoji Movie, now that was a slog to get through.