The Australian Dream(2020) by Phil Slatter 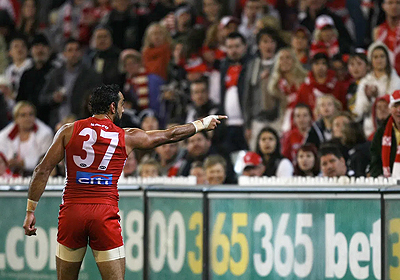 "is in equal parts, horrifying, interesting and relevant"

Much like the sport for which he became famous, the name Adam Goodes may not be particularly well known outside Australia. Goodes is an Australian of aborigine descent who, according to Daniel Gordon’s impressive documentary, became one of the great players of Australian rules football. Yet his story is not an entirely happy one, for his life and career became plagued with the sort of racist abuse that is sadly commonplace the world over.

In equal parts the story of Goodes career, an examination of Australian history and an expose of racism itself, The Australian Dream is in equal parts, horrifying, interesting and relevant.

Goodes himself comes across as a humble and restrained individual for the most part - a man born of a Scottish/Irish father and an indigenous mother, he came to learn and subsequently embrace the history of a people who had been erased from history itself. Despite people living in Australia for 60,000 years, Australia was declared an ‘empty land’ when the British arrived in 1770 and the natives have struggled to be recognised ever since.

Subsequently, hostility still sadly exists towards those of aborigine descent and that prejudice has manifested itself through the Australian Football League. The film, examines many incidents that demonstrate the ingrained racism, from AFL player Nicky Winmar responding to racist taunts by pointing to his skin (an iconic image in the sports history) to a T.V. show host ‘blacking up’ in a moment that will leave your jaw on the floor in bewilderment as to how and why anyone though such a stunt would be ok.

There is also an in depth look at a moment when Goodes was called an ‘ape’ by a fan and he angrily reacted by demanding said fan be kicked out of the stadium. When said fan turned out to be a 13 year-old girl, it exposed how racism can show its face in many guises and that its root is in education. However, the publicity that surrounded the incident caused a backlash on Goodes that the film addresses well allowing you to have your own internal debate on it, before vile racist abuse from grown adults came Goodes way on, shock horror, social media.

It’s a story that feels both completely new and horribly familiar – from the NFL to the Premier League, we see this type of thing rearing its ugly head all too often in far too many countries.

It uses sport as its metaphor for society well and while we learn about Goodes, we also learn more about Australian history, becoming more educated - crucially the best way to eradicate the plague of racism from the world.

Amidst the horror that has gone before, The Australian Dream, does end on an optimistic note, as shows of support for the indigenous population and Goodes himself come out like a wave, whilst closing shots of Goodes strolling along the seafront with his pregnant wife is a look to the future that maybe, just maybe, his child might not be subject to the same abuse he was. We can but hope, and this important and emotional documentary will certainly help.