The Devil All The Time(2020) by Sarah Morris 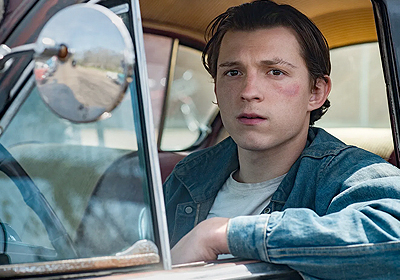 Produced by Jake Gyllenhaal and Randall Poster, and Directed and written by Antonio Campos, The Devil All The Time is an American Psychological Thriller based on the novel by Donald Ray Pollock.

With an all-star cast, consisting of Robert Pattinson (Preston Teagardin), Tom Holland (Arvin Russell), Bill Skarsgård (Willard Russell), Hayley Bennett (Charlotte Russell), Harry Melling (Roy Laferty) and Sebastian Stan (Lee Bodecker/ Sheriff) this film brings a lot of suspense, darkness and violence to the screen. If you are sensitive to violence and dark films this is not the film for you.

Upon the release today, I had been looking forward to watching this film for a while and, I can honestly say, this film lives up to all my expectations, I just was not expecting so many feelings of suspense.

The plot of the story surrounds a young man who is protective of his family within a backwoods town from people who have sinister characteristics.

From the second the film starts playing it is already telling the story from when Arvin’s dad (Skarsgård) was in the war, before Arvin was born, to the young boy growing up after losing people close to him at a young age – which explains his behaviour to protect the family members who still exist around him. The story is very well explained from start to finish and despite the violence and the darkness of the film, it keeps you hooked right to the end.

The film is set between the end of World War 2 and the Vietnam War, which presents tales of violence and misery that’s been passed down in family generations and at the centre of all the violence, darkness and misery is a young lad named Arvin (Holland).

The film also focuses on a few different characters, one being Arvin, his sister Charlotte (Bennett) , the new town priest/reverend called Preston (Pattinson), a preacher named Roy who is known as “the spider-handling preacher” and a married couple named Carl and Sandy Henderson who are quickly known for their unique way of life and what they do, which keeps you gripped throughout the 2 hours  duration of the film.

This film is about faith, so there is no surprise that at the centre of the film is the town's church and the preachers of the church, and heavily focusing on religion, but with dark twists, with the narration being the author himself, Donald Ray Pollock.

I did enjoy this film and it was well worth the wait! Well done to Netflix for creating a film with a great casting as I was worried about the violence due to seeing Tom Holland in more uplifting films like Spider-Man, but I give credit to him - he did play the role in this film very well, I am also impressed with the character portrayed by Robert Pattinson too, he played it well, but as I have seen him play characters with similar traits before, and recently in The Lighthouse, I was not overly surprised he was playing a character of suspicion. However, great work, great film, I enjoyed it very much, a thumbs up from me on here and on Netflix! This is one of the few films I will remember for a while.