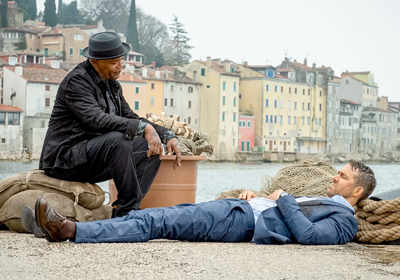 "Reynolds has truly found characters he can excel at: Action heroes who run their mouths with jokes and sarcasm"

Back in 2017, The Hitman’s Bodyguard teased us with the great pairing of Ryan Reynolds and Samuel L. Jackson. Through great marketing, the whole premise looked like a laugh riot. Flash forward four years and the film remains unremarkable and forgettable. I could not tell you a single joke or any scenes in the movie, expect for loose characterisation and a shaky storyline. Gary Oldman is in it, apparently? A fact I learned only from a joke in a Superstore.

Anyway, with these thoughts in mind when settling in for its sequel – The Hitman’s Wife's Bodyguard it seemed that it was set to improve on the experience of the first film. Whilst this was somewhat the case, the film’s lacklustre energy and scattered plot fails to save the movie.

The Hitman’s Wife’s Bodyguard sees Michael Bryce, our titular bodyguard, in therapy and trying to recover from the events of the first film. It’s a struggle because he has lost his licence and has nightmares about his adventures with hitman Darius Kincaid. Whilst taking a break from his old life, and trying to regain his thoughts, Bryce goes on holiday. However, his relaxing holiday is disturbed by Darius’ wife Sonia and Bryce is unwillingly taken into another life-threatening mission.

I heard that Ryan Reynolds hurt his back whilst filming this movie. After watching the final product, it was clear why – he was carrying the whole damn thing. Reynolds has truly found characters he can excel at: Action heroes who run their mouths with jokes and sarcasm. There is a lot of Reynolds infused here, especially little detailed jokes that feel like he wrote them as they stand subpar against the other classless, boring humour. Basically, playing the “straight guy” against the cacophony of crazy, Reynolds facial reactions and quips are brilliant. In fact, his energetic and hilarious responses are the only ones to procure laughs – out loud ones too!

The problem is that the rest of the film doesn’t really live up to his shenanigans. Salma Hayek is an archetypical woman in an action movie – and even gets the girl fight to prove it. She is loud and shouty whilst killing as many people as possible. Beyond being a con-woman all she cares about is having a kid, shopping, and going to the show all while her husband moans or falls asleep. See, hitmen are just like us! Sonia is overly sexualised as well: In one scene, she inexplicably takes her top off to kill some non-descript bad guys then has a hoody on the very next scene. No matter how hard Hayek tries, the shoddy writing brings her down.

The rest of the performances are nothing of note – Morgan Freeman, Samuel L. Jackson, and Antonio Banderas are there to cash cheques and say “motherfucker.” Banderas is supposed to be Greek and yet makes no effort to change his accent from his distinct Spanish.

It is hard to say that The Hitman’s Wife’s Bodyguard is disappointing because the expectations were so severely low. However, without Reynolds holding this weak script and ensemble together, it would fail to meet any.