The Host(2020) by Jonathan Hughes (The Killer Spotlight) 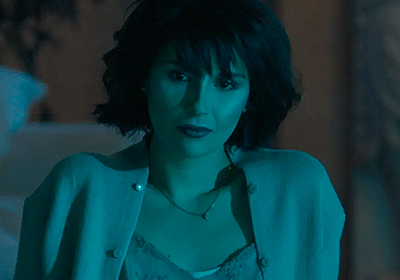 "Heart-pumping twists around every corner"

So you're a down on your luck banker who wants to make it big so you steal, risk (and lose) £50,000 on a Poker game and then a shady looking stranger offers to help wipe away your £50,000 debt and offer you some extra money. All you have to do, is take a mysterious briefcase to Amsterdam and do an exchange with shady people.... Would you do it? Well would you??

Well Robert Atkinson (Mike Beckingham) said yes to this scenario in The Host, as he is so desperate to not only get this damn £50,000 debt wiped but to get a little ahead for once in his life as he is sick and tired of never getting ahead. But come on, do you really think this is going to go as planned? Especially when the shady characters he got involved with become the least of his worries when he meets an 'Interested' fellow on his plane to Amsterdam and a hotel hostess named Vera Tribbe (Maryam Hassouni) who let's just say has some SERIOUS Daddy issues.

Eventually Robert's brother Steve (Dougie Poynter) is dragged into Robert's mess, and in an attempt to save Robert's life with some help from Herbert Summers (Nigel Barber) and Jun Hui (Suan-Li Ong). However, the more involved he gets, the deeper down the rabbit hole he goes and the crazier the discoveries he makes.

Gotta give a round of applause to Mike Beckingham for his performance as a man desperately trying to put out one fire after another and Dougie Poynter as a man just trying to be there for his brother. But Maryam Hassouni STEALS IT as Vera Tribbe; a seemingly sweet and caring lady with a dark secret lurking.

Maybe this film has one too many plots happening at once but if I had to be honest I kind of enjoyed this as it makes the twists that much more shocking as you're too distracted with the main plot to see what's coming from out of nowhere. A very well choreographed and cleverly written screenplay by Fiona Geraghty here and well directed by Andy Newbury. Gotta love the opening title sequence and the music too by Wan Pin Chu. The atmosphere is a little nerve racking as you don't know just how further messed up it's gonna get. Heart-pumping twists around every corner.