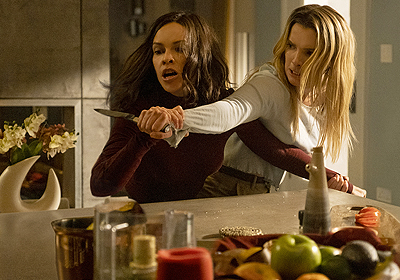 The Hunt is a film inspired by Richard Connell’s 1924 short story The Most Dangerous Game, about a rich big game hunter who hunts humans for sport, who finds the ultimate hunt when he goes on to hunt another big game hunter, with an equal skillset forms the main basis of the the short story.

It was originally scheduled for release in September 2019, but it was delayed because of two mass shootings in the USA in August 2019, followed by Donald Trump's criticism of the film referencing the storyline of rich liberals shooting and killing working class conservatives for sport. This combined with the other political backlash caused Universal Pictures to pull the film from release at that time. One thing to note is this was all based on the trailer as The Hunt hadn't been viewed by those objecting to it and it's subject matter.

The film begins with a group of 'liberals' on a small private flight in conversation in a contrived fashion to establish characters and a premise. During this verbal exchange one of the drugged and kidnapped "conservatives" wakes up wanting to know where he is and what's happening. In what seems like a very poorly developed and constructed scene the victim is killed. This hasty opening is designed to establish the characters, plot and tone of the film and the narrative to follow.

Continuing in contrived way, the film cuts to a clearing where the remaining group of 12 drugged and gagged strangers begin to wake confused and disoriented. Not knowing where they are or how they got there, they are drawn to a large wooden box in the clearing whilst cautiously observing each other.

After one the group manages to open the box they find the keys to remove their gags. Along with the keys there is a large selection of firearms and knives. Without question they begin to arm themselves. As soon as they do this they come under fire during which some of the group engage in a firefight and some run.

Those who escape reference without question an internet conspiracy theory about a group of "elites" that choose and hunt people in a remote area from a Manor House.

With the "game" underway the "elites" seem to be content with how the hunt is progressing, however they hadn't reckoned on one of the "deplorables" (a derogatory term used in reference to the intended hunt victims) Crystal (played by Betty Gilpin), is intent on fighting back and seems to have weapons and combat training.

The Hunt has an interesting premise for a film with a nice nod to cultural references from our time set against the backdrop of the current liberal and conservative political division in America. However it fails to capitalise on this leaving it feeling rushed and underdeveloped with caricatured performances. With a bigger budget, more character and plot development maybe The Hunt could have been a classic film with great some social commentary, instead overall it feels like a mere synopsis, rather than a fully developed film. Without the political controversy which surrounded this film more than likely it would have disappeared without note. To use a term from the film which caused some of the controversy, the film is deplorable earning itself two stars.