The Irishman(2019) by Federica Roberti 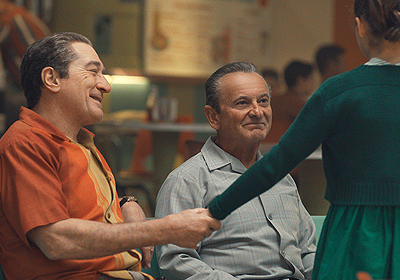 "another masterpiece made by this resilient and brilliant director, whose elegance, craftsmanship and talent cannot be replicated by anyone else"

To be completely honest, when I first heard that The Irishman was going to be 3 hours and 15 minutes long, I was slightly concerned. No film can have that much to say. Well, no film went to such extreme lengths to tell a story about the Italian Mafia in New York, and only Martin Scorsese could have accomplished something so big in such a spectacular way without confusing the audience or lose them halfway through.

The story is the confession of Frank Sheeran, a truck driver and former official of the American Labor Union Teamsters, who had deep ties with the Italian Cosa Nostra and Russell Bufalino.

The movie itself is based on “I Heard You Paint Houses” by Charles Brandt, a former investigator who interviewed Sheeran during his last years and wrote about his confessions as a hitman for the Bufalino family.

With such an intricate story based on true events in history, making a film that was rushing through the events wasn’t going to cut it. However, only Scorsese could have made such a long feature and still keep the attention of the audience and the momentum of the film.

The story starts in the present and it moves through the year before Sheeran’s conviction, to then go back and follow him through his ascention within the Bufalino family as Russell Bufalino’s right hand.

Here Scorsese made the choice to not recast his leading men but to reverse their age using CGI. A bold move that could have back fired by looking slightly weird in the beginning and grows on the audience throughout the film, making you almost forget that CGI was actually involved.

To be perfectly honest, the film wouldn’t have worked any other way. No one could reach the talent of Robert De Niro, Joe Pesci and Al Pacino. This trio still shows the younger generations of actors how it is done. Their commitment to the story and their characters is like no other.

De Niro is perfect as Sheeran “The Irishman”. As the famous Mafia hitman, De Niro doesn’t just show Sheeran’s loyalty to Bufalino and his cold commitment when completing a job. He also highlights his conflict in his last difficult task requested by his boss, bringing to the screen a layered character who is capable of creating a connection with the audience.

Joe Pesci is at De Niro’s same level. His Russell is calm, collected but also extremely ruthless. The perfect Mafia Boss that gets things done for the greater good without broadcasting his power but still demanding respect. Pesci maintains Russell’s collected and cold behaviour throughout the film and his chemistry with all the characters in the story is almost unbelievable.

On the other hand and complete opposite to Pesci’s collected and calm Russell Bufalino, there is Al Pacino’s Jimmy Hoffa. Completing the trifecta of legends on screen, Al Pacino, like his other two illustrious co-stars, fills the screen with his talent and magnetism. As Hoffa he is strong willed, independent and doesn’t like to be relegated to the sidelines. Pacino still has the same stage presence he had while playing Tony Montana. His commitment to the story and his character are outstanding and most of the comic relief is due to his brilliant delivery of the most simple lines.

All three of them, directed by Scorsese, brings to the screen a complicated and intriguing story about America’s most infamous Mafia family through the eyes of one of its most loyal hitman.

Many describe this film as Scorsese’s farewell to cinema, but, after watching The Irishman I cannot image Hollywood without another masterpiece made by this resilient and brilliant director, whose elegance, craftsmanship and talent cannot be replicated by anyone else.