The Kindergarten Teacher(2019) | The Fan Carpet

The Kindergarten Teacher(2019) by Melanie Radloff 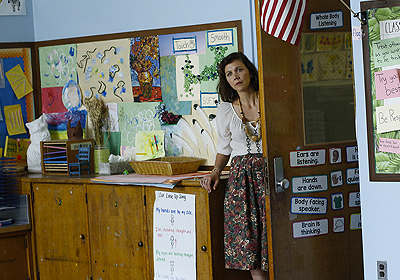 A Kindergarten Teacher sees great artistic promise in one of her 5-year-old students and goes above and beyond to nurture his talent. The film written and directed by Sara Colangelo stars Maggie Gyllenhaal as Lisa, Parker Sevak as Jimmy and Gael García Bernal as Simon.

Sara Colangelo delivers a surprising and shocking tale of nurture and obsession, an unsettling character study of the titular 'Kindergarten Teacher'. Maggie Gyllenhaal embodies Lisa to perfection, a Kindergarten Teacher brimming with creativity yet stuck in a boring life, a boring marriage, disappointed with her children, frustrated out of her mind. When she sees the chance for greatness in someone else, a little boy called Jimmy who is easily shaped and influenced, she cannot resist the opportunity. And this is where the film and her character really make you sit up, pay attention and start to question what you're seeing. It is a rather disturbing journey the film takes you on, but that is exactly what makes it so outstanding. The unexpected dark turn grips you, Gyllenhaal's performance makes your skin crawl and you cannot help your gasps of shock and surprise of what you're seeing throughout the second half of the film.

On the one hand this is the ever present story of parents living through their children, wanting them to have the lives they couldn't have, achieve what they couldn't achieve. Lisa looks at her own children as failures because they don't seem to have creative talent or any interest in the arts, which is what matters most to her.

Her daughter gets straight A's, her son wants to enlist, and yet it isn't enough. So she wants Jimmy to have the life she never had' she is under the impression she never got anywhere with her poetry because she wasn't getting the support she needed, but maybe deep down she knows she wasn't talented enough, that she wasn't an artist. She brings up Mozart, another child prodigy, who she thinks would never have been able to create what he did without the support and nurture he received.

Lisa's yearning for a creative outlet in her rather mundane life is relatable at least in its escapism, but it really hits home when you discover she has all the passion but no real talent. And there is this little boy who is the embodiment of the exact inversion of her. He doesn't even try, it just pours out of him. The juxtaposition of these two really broke my heart and it sets a solid foundation for what's to come.

What 'Kindergarten Teacher' boils down to for me is Lisa's yearning for connection with someone who appreciates the same things and shares her values. Neither her husband nor her children seem to take an interest in her passion let alone understand it. She goes as far as to sleep with her poetry teacher who she rebuffs at first, but the connection with a like-minded person is too strong to ignore. Lisa's loneliness is even more tragic when you consider she's alone in a crowd. The worst kind of loneliness. Gyllenhaal manages to depict Lisa's decision to connect with a 5-year-old as a last resort more relatable and believable than it may sound. We can relate, we emphasise, we understand. It is a haunting portrayal of loneliness, desire and obsession.

Yet I couldn't help but wonder how this film and its plot would be received with a leading man instead of a leading lady. Too easily would we judge and assume the worst, and a lot earlier in the film than we would ever allow ourselves to even consider the possibility of anything like this happening with a woman going after a young boy. We see women as nurturing first and foremost and I think this is why 'Kindergarten Teacher' works as brilliantly as it does, making us feel for both Jimmy and Lisa in its rather disturbing tale.

Without Gyllenhaal's captivating and nuanced performance the entire premise would fall apart. If we don't engage with Lisa and her situation we will not be able to allow and care for her journey and decisions later on in the film. The entire film sinks or swims with Gyllenhaal's performance and she turns out to be a strong swimmer.

I don't have any children but still found the narrative deeply disturbing, so please consider yourself warned. There is no violence towards the child depicted in the film, but there is a kidnapping scenario amongst others so please be aware as this might trigger some people. The film is not easy to digest and lends itself to lengthy discussions afterwards. I would go as far and say you might want to watch this with a friend as I did as we both immediately had to talk about what we'd just seen. This is one of the film's aspects I thoroughly enjoyed and I congratulate Colangelo and Gyllenhaal on their daring approach. A tough to stomach yet must see of a film.