The Lighthouse(2020) by Ben Peter Ward 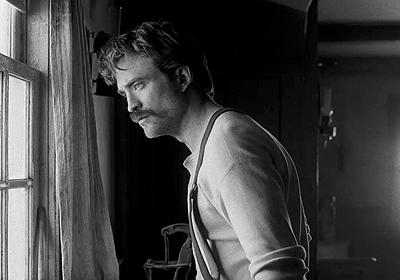 "To start with the positives, this film is shot in black and white in the 1.19:1 aspect ratio which immediately gives a feel of a bygone era of cinema and stylistically reminded me a lot of Alfred Hitchcock"

I must admit, this review has been one of the more challenging I've ever done. I've started it and come back a few times, rethinking how I want to describe and analyse The Lighthouse, to try and give it a fair review.

There's been somewhat of a buzz around this film for a while, and whilst it's labelled as a psychological horror I don't know if this is the best or most encompassing genre for it to be described as.

To start with the positives, this film is shot in black and white in the 1.19:1 aspect ratio which immediately gives a feel of a bygone era of cinema and stylistically reminded me a lot of Alfred Hitchcock, although it appears that some of the the effects used (the seagulls especially) could have been ripped directly from "The Birds". For near the entire run time this is essentially a two man show between William Dafoe's Thomas and Robert Pattinson's Ephraim, and whilst there is no debate that both actors are extremely talented, this feels very much like it would of ben better suited to an off Broadway or similar production.

It also cannot be understated that if nothing else this film serves as a vehicle to show that Pattinson has cast the funk of a certain Sparkling Young Adult Vampire Series which I can not mention and should be viewed as the brilliant talent that he shows himself to be, throughout my thought process on the pros and cons of this film, his performance struck me as somewhat more genuine than originally expected; a personal highlight I would consider is his monologue from near the end of the film, it’s heartfelt and striking and in my opinion is his stand out moment.

However, from here on is where trying to describe the experience of The Lighthouse becomes tricky, there are some flashes of superb acting from both leads, as well some darkly comic moments. These comic moments are hit and miss, and given that the film seems to take itself quite seriously the reliance on what is essentially toilet humour seems quite out of place, even if they do break up some of the more tedious moment. I suppose however there is the unique selling point of a couple of gratuitous scenes of Pattinson masturbating which I imagine may become a notorious footnote in his carer depending on how well this film is received.

Another point of contention is that the plot seems to go nowhere and feels very disjointed, the unreliable narrator trope is perhaps overused to a degree; the best way I have found to make sense of the jumbled plot is to view this as a visual representation of purgatory or to an extent, a mans journey into madness and subsequent fall.

There are deliberate scenes which attempt to make you question whether or not our leads sanity is fully intact, conversely however these can also be seen as a representation of gaslighting. There are some elements of character growth and some twists throughout but it feels almost tacked on to a plot which could easily be a drunken sea shanty at its core.

Lastly whilst in the same area of discussion, whilst this is as stated before a psychological horror the stakes never feel grand enough to actually feel scary or intense, sure we see at times two men destroying each other physically and mentally but it’s just that.

Towards the end of the film we descend into weirdness for weirdness sake, whilst I do understand that this is a very different style of film and perhaps narrative, it just didn't gel or appeal to me, which I find a shame as it detracts from the parts I did enjoy.

The ending is also purposely open ended, attempting to have you consider what you just watched and for you to decide what your own meaning is, this isn't a bad thing per se but it strikes me as wanting to appear more nuanced than it actually is.

Overall I’d have to say that whilst this is by no means the worst movie I have ever seen it just didn't work for me. There are certain parts I feel that fans of cinema and the lead actors should see and experience but I wouldn't rush out to do so. Due to the squandered potential I can only give this a 2 out of 5 stars.