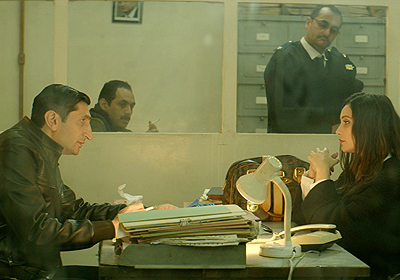 In a corrupt world, what happens when one man says no? This may have been the question that David Ayer and Antoine Fuqua continuous asked when they were making Training Day back in the early noughties, but it could easily be applied to The Nile Hilton Incident, an impressive film noir in an unfamiliar setting that is positively dripping with social commentary.

It opens in Cairo in early 2011 with a television intermittently questioning the moral fabric of the social setting. The T.V. set belongs to Noredin Mostafa (Fares Fares), a Police commander with a deceased wife and no money who smokes weed at the end of the day spent in a world gone to hell. For as towering billboards promise a better future for the Egyptian capital, beneath them lurks an underbelly of crime and corruption lead by a police force who think nothing of ordering room service to a murder scene and then charging it back to that self-same room.

Our guide through this world is Mostafa, and Fares brings the right amount of tension, despair and acceptance to the role as he is assigned to the aforementioned murder of a singer, witnessed by a migrant cleaner. All the important people don’t seem to want it solved and as Mostafa digs deeper, despite orders to the contrary, he begins to understand why.

He is in way over his head in a world where everyone is poor and can be subsequently paid off while the wealthy and powerful consequently continue to do as they please, with no fear of retribution. It paints a picture of a situation that would result in a very real uprising. As it unfolds, the level of corruption and individuals involved makes you start to realise that things simply can’t end well for either Mostafa or his investigation.

It has an anger with society that we have come to expect from Asghar Farhadi in recent years, and while writer/director Tarik Saleh takes a broader approach with his storytelling here, the anger and commentary remains none the less apparent. A touch too long perhaps, but none the less gripping, sad and relevant.