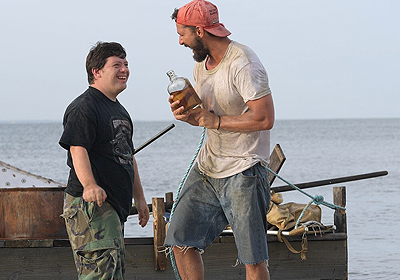 "takes its time in making points, which some may lose patience with, but treats the eye with some masterful cinematography as it goes along"

The Peanut Butter Falcon is a very beautifully shot film. Aerial shots and panoramic landscapes are juxtaposed with tight, intimate shots, often to comedic effect. The comic timing of the editing throughout the film was superb, supporting a really heartwarming story.

A mise en scene of sun-bleached hats, flakey paint and bare necessities rooted the film in a working class, rural space that lacked options and oozed authenticity. A soundtrack of earthy country and blues firmly locates the film in the deep South.

The chemistry between the three main characters - played by Zack Gottsagen, Shia LaBeouf and Dakota Johnson - was palpable. The relationship between Tyler and Zak (Le Beouf and Gottsagen) in particular, as expected from a buddy movie, develops the most. This is cleverly demarcated by Tyler’s gradual offering of more clothes to the runaway Zak. As Tyler finds the motivation to accept Zak, Zak is almost rewarded with humanising clothes, experiences and ultimately, kin.

Speaking of motivation, Dakota Johnson effervesces as Eleanor and adds a deeply feminine and witty performance to an otherwise masculine world. Eleanor shares the deep care for Zak that Tyler grows to have, and their different approaches to this spark interesting frisson. Nods to wider social issues add depth to The Peanut Butter Falcon, but manage never to overtake the main, redemptive buddy story.

Supporting performances from Bruce Dern, Thomas Haden Church, Wayne Dehart and many more pile on humour and humanity to a film that lacks neither. Audible chuckles abounded in the intimate screening I was privileged to join; the attendees of which varied widely in age, but by all accounts were united in the warm fuzziness we were left with. The Peanut Butter Falcon takes its time in making points, which some may lose patience with, but treats the eye with some masterful cinematography as it goes along. I hope this film gets the viewership that it deserves; a cinema visit is highly recommended to get the full scale of both the shots and heart of this story.