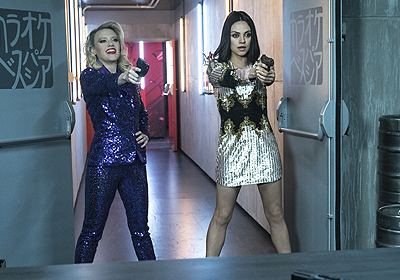 Getting dumped isn’t nice for anyone. Especially getting dumped by text. It’s an awful feeling of betrayal and abandonment, with no room to argue or talk about your issues. So what happens if that text jerk turns out to be a spy and you are unwillingly thrown into the middle of it? That’s the centre of The Spy Who Dumped Me.

The Spy Who Dumped Me revolves around Audrey Stockton, a cashier who is stuck in her life and miserable after her boyfriend Drew dumped her via text message. Her best friend Morgan is trying to cheer her up with a birthday party but when Audrey receives an unwarranted phone call from Drew, she winds up sad again. The following day, Audrey is contacted by CIA. It turns out Drew was a spy and there are many bad people after him...It’s up to Audrey and Morgan to save the day but are they the best people for the job?

OK. Correction, that’s a lie because our double act Mila Kunis and Kate McKinnon have terrific chemistry together. They are certainly right for the job. I feel like Kunis has come into her own in filmmaking since her success with Bad Moms. That kind of despondent lead who is bumbling and foolish but also has her own agency and strength gifts Kunis this perfect typecast that has become her own.

Kate McKinnon has built a reputation as an oddball on screen which works, somewhat. She needs a better written role. Firstly, Hollywood need to stop seeing her as the quirky side character and give her a lead. Secondly, they can’t just write her the weakest character traits and then let the actress run loose. There needs to be craft and skill because when you hit that sweet spot with McKinnon she is impeccable. Here the jokes don’t land as much as they should, and that’s largely because McKinnon is off-kilter, perhaps too much, for this type of mainstream comedy.

The Spy Who Dumped Me is a good twenty minutes too long. What would’ve made a snappy, great 90 minute comedy is stretched across the minutes and it bores in places. The storyline is too convoluted to survive nearly two hours of action and it isn’t moulded together well. I do have to say that the creators here, helmed by Susanne Fogel, know exactly how to stylise the movie. The beginning spy moments of Drew are colourless and brown, adding a layer of intimate intelligence.

The movie is good for some fun and it’s great to see Sam Heughan venture out of the Highlands into some big screen ventures (and let it please continue.) There are some truly amazing moments and the movie doesn’t hold back on the gore, which offsets the hilarity greatly. Definitely one to take your girlfriends to or head out for a ladies night, The Spy Who Dumped Me is ultimately about friendship and that’s nice.