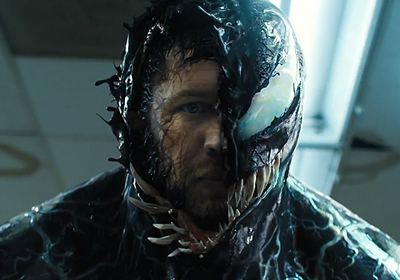 "a slightly generic yet still very enjoyable story, albeit it being at times a buddy cop-esc plot with buddy cop being replaced by a voice in Eddie’s head"

Venom is Sony’s long-awaited anti-hero flick that was much talked (and quite possibly groaned) about for a while now, considering the stellar offerings from Marvel Studios and Fox it’s got a lot to live up to, the question was: could it do so?

The answer is yes and no, the tone of the film is noticeably different, it treads a line between serious superhero action and dark yet on the whole cheesy PG humour.

To start with the cast and plot, Tom Hardy plays Eddie Brock; for those not familiar, Eddie is a journalist who we find out was “run-out” of New York and is now living in San Francisco with his partner Anne (played by Michelle Williams). Due to his thirst for a story and need to expose the truth his life comes crashing down around him after a run in with The Life Foundation whilst attempting to expose Carlton Drake (Riz Ahmed).

The Venom Symbiote chooses Eddie to be its next host and what follows is a slightly generic yet still very enjoyable story, albeit it being at times a buddy cop-esc plot with buddy cop being replaced by a voice in Eddie’s head (voice provided by Hardy). This is a fresher concept than we’re used to from a superhero/comic book movie even if its played equally seriously as well as for laughs.

The result of this is a largely enjoyable romp which can come off as a throw back to the pre – MCU days of the comic book genre. Hardy embraces some of the more absurd and out there elements of the plot and his enthusiasm helps us get behind him. My main criticism of the plot is that it feels very by the numbers and somewhat predictable, it was always going to be difficult to craft a compelling story for Spider-Man's arguably greatest foe without actually incorporating Spider-Man in the plot. The result is a somewhat safe outing that with the exception of perhaps a few choice moments is fun for the whole family.

Also as will have been lamented on by many, it feels like Sony have missed an opportunity opting to make Venom a PG13 release, with both Deadpool and Logan earning a much more mature rating and therefore being able to faithfully adapt the source material, Venom could have been a much darker and serious piece, though I suppose not every story has to be realistic and gritty, there is still a lot to be said for the fantastical elements of comic book lore that sometimes get overlooked.

Whilst not necessarily a fault, the soundtrack doesn't feel fully realised, with Eminem’s “Venom” being the only real stand out number and that only plays during the credits. Lastly, it wouldn't be a modern superhero adaptation without an after credit scene and Venom doesn’t disappoint, I won't spoil what happens however it does feel like a moment fans have been waiting for.

In summary, the film is best when it’s not taking itself too seriously, it’s fun and more importantly, whilst it may lack the quality of the main MCU and Fox’s X-Men/ Deadpool universe it’s a solid start and a jumping off point for numerous Venom-centric stories that would be great on the big screen.