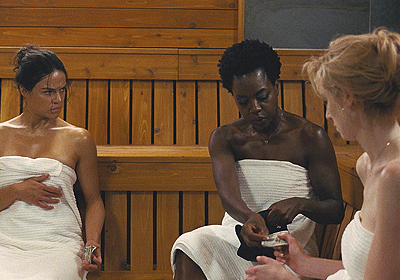 The Opening Gala of this year’s London Film Festival was Steve McQueen’s adaptation of Widows and it is a great portrayal of today’s society in America mixed with a good dose of thriller and action.

After tragically losing their husbands, three women find themselves involved in a dangerous criminal and political spider web that forces them to complete the last heist planned by their spouses.

Set in contemporary Chicago, McQueen finds a compelling story to represent the current political, cultural and racial situation in America.

As a director his way of controlling the camera capturing each scene is precise and attentive. He doesn’t want to just tell a story, he wants his characters to firmly represent the reality they are living in as well as brilliantly highlight their social context.

The themes of racial injustice, abuse and political corruption are constantly under the spotlight with extreme care without dividing the characters between saints and villains. Everyone has faults, and the only difference that sets them apart are the reasons behind their actions.

The cast ensemble sees 4 woman leading every scene in the film with such extraordinary strength and determination. Not only are the leads are all female, they all come from different cultural backgrounds. Diversity is key in the story and it emphasises the strong critique to white supremacy and the fragility of its ego.

Viola Davis leads the group with another impeccable, honest and deep performance. She portrays Veronica Rawlings with determination. Her character is a black woman, married to a white man who lost everything and has nothing left to lose. She fights for herself while still showing extreme vulnerability and loyalty.

Michelle Rodriguez, Elizabeth Debicki and Cynthia Erivo compliment Davis’ performance with their own uniqueness. Each woman has her own life story and motivation behind the decision to join such a difficult mission. Their lives’ hardships are what makes them determined to complete the heist and save their families. Rodriguez, Debicki and Erivo completely lost themselves in the challenge and delivered a truthful representation of female power.

Although, at times, the pace of the movie can feel slightly too long and the story too descriptive with scenes filled with dialogue, Widows successfully bring to the screen a crime thriller that shines a light on contemporary political and cultural topics, making them poignant and interesting by using an intriguing plot that keeps the audience entertained and interested.