Fantastic Beasts and Where to Find Them(2016) | The Fan Carpet 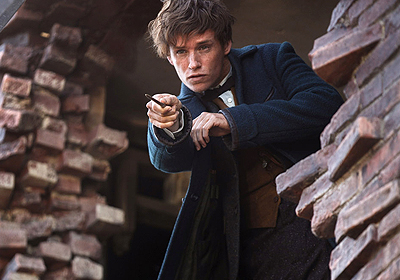 The next dose of Harry Potter brings charm, mystery and most importantly magic back to our lives in a way that all fans of the wizarding world can immediately devour. Following such a popular franchise is no easy task; albeit director David Yates sprinkles wonderment over JK Rowling’s once again incredible material. With slightly more scares than the aforementioned series; Fantastic Beasts and Where to Find Them brings a somewhat adult touch but still carries that spark young ones are sure to connect with.

First published back in 2001 a few years after it was mentioned in the Philosopher’s Stone, this dinky little book makes for quite the cinematic experience. Taking place before the Potter world we so quickly delved into, this prequel of sorts resides in a smoky, 20’s America. Prohibition and depression ridden, it seems New York needs something fresh and that ladies and gentlemen comes in the form of one hell of a talented Eddie Redmayne as Magizoologist and all round animal lover, Newt Scamander (Eddie Redmayne). Arriving in the hope of obtaining a new mini beast to add to his ever growing collection and despite keeping such things under tight ‘muggle worthy’ lock and key in a suitcase; the adorable Niffler, obsessed with shiny things, gets out - causing havoc for the No Maj's of New York. Meeting former Auror; Portentina (Katherine Waterston) and her Monroesque mind-reading sister Queenie (Alison Sudol), it seems that his pets aren’t the only things roaming around the city causing destruction. Dark, terrible forces emerge that could possibly knock a Dementor off his game and give Voldemort a run for his wand.

Desperate for the rest of the magical world to understand why he keeps such beasts and claims they are not dangerous, Newt becomes the hero helping President Seraphina (Carmen Ejogo) in capturing this power that is threatening the exposure of the wizarding world and harm to anyone who gets in its way. Whilst the President’s sidekick Percival Graves, played incredibly well by a slick, suited and booted Colin Farrell is working his way through the dark side of magic to imprison this being, we are presented with a particular version of America that perhaps needed supernatural creatures to get smiles back on their faces, although bubbling under the surface are sinister tones and ominous characters waiting to make their move. Dark colour palettes consume the city, creating a very gothic, gloomy tone that enhances the forces at play.

In juxtaposition of such grey-ness, Newt’s suitcase holds quite the colourful world in which the gloriously clueless muggle Jacob Kowalski (Dan Fogler) takes a few minutes to come around to. Thus providing memorable moments and frequent laughs aside impeccable comedic timing. Encouraging such giggles is the sensational Queenie, who promptly reads everyone’s minds resulting in a humorous, yet story affirming detail to be revealed – a nice little tactic. Romance materialises in a suitable, heart-warming manner and above all else this story is brimming ear to ear with life.

Ezra Miller’s troubled and deeply hurting Credence come black smoke time-bomb of an ‘Obscurus’ has some questionable moments; as well as the incredibly disturbing set up he has with radical hater of all things magic Mary Lou (Samantha Morton). Waterston holds her own, but the most memorable performance is by far Redmayne’s Scamander. This full of heart, considerate and eccentric fellow is played with so much compassion, quirkiness and endearing strangeness (who else can dance like that?!) that it seems Redmayne was the ideal match for this Hufflepuff.

This is a universe we are somewhat familiar with and when it comes to introducing new characters it is hard to avoid the formulaic set-up in order to appease audience members. To a point this follows such a format, but in this respect its essential and one simply can't complain whilst being subjected to weird and quite frankly magnificently cute and naughty creatures being chased by Newt for an hour. Aided by some outstanding special effects, virtually every creature dreamt up and reconstructed here are so impressive that they are all worthy of a gasp, an aww or a chortle to the person sitting next to you.

Despite not wanting to let go of the Hogwarts world we all know and love dearly, Fantastic Beasts and Where to Find Them makes it’s mark and then some. We all knew this was going to be good; but not only does this do justice to Rowling, this adventure is the embodiment of all our favourite Potter moments and so, so much more. A twist that a few may see coming alongside tactful and devious hints to characters we know so much about already and ones we are dying to hear more about; Fantastic Beasts certainly doesn’t disappoint.

Out in Cinemas everywhere this Friday, be prepared to be whisked away to a world, not too dis-similar to ours but one that is far, far more exciting.