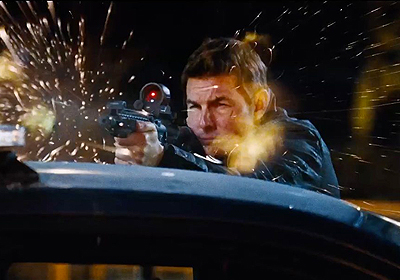 You'd be forgiven if you looked at the admittedly small amount of marketing given to this film and dismissed it as your bog standard action film, whilst it does stick to some very well established tropes and clichés it’s very entertaining and I feel it is an improvement on the original.

Both films are based on novels in the Jack Reacher series by Lee Childs and whilst the original wasn't as well received in North American markets as it was expected, it enjoyed success internationally making this sequel possible.

For the uninitiated, our main character is the titular Jack Reacher (Tom Cruise), an ex-Army Major living life under the radar whom on occasion comes out of self imposed exile when the right person needs his help, he’s portrayed as being effortlessly cool and can talk or fight his way out of every situation. This has lead to him being compared to Jason Bourne and his Mission: Impossible character Ethan Hunt. Cruise plays this with ease due to said similarities; this isn't a bad thing, whilst this may not have the same level of class as your classic bond-esq thrillers it's more than enough to keep you happy and engaged throughout.

Another welcome addition this time round is the addition of Cobie Smulders as Major Susan Turner, her character feels a fair amount different from her most well known role as Robin in How I Met Your Mother, but there are a few similarities that fans of hers will pick up on. She also takes what could be described as a potentially one dimensional character and shows some real depth to her acting ability, and whilst there is always a hint of sexual tension between her and Reacher it doesn't distract from the main story.

The plot itself involves Jack freeing the previously mentioned Major from wrongful imprisonment and when the both of them attempt to clear their names of the murder of two people in Major Turner’s charge, they uncover an off the books operation being lead by a private military contractor. It’s nothing new but none the less it works in the context of the plot.

My only real complaints with the plot are that the villainous private contractor previously mentioned have no real motivation aside from money and greed. Sure this has been a motivation in countless other plots but in my own opinion this feels flat, secondly there's a lack of suspense throughout the film. Part of this may be due to knowing from the original that Jack can and will get out of any situation like a military Houdini. It’s the small details which could of turned this from an entertaining action movie to an unforgettable piece of cinema.

To summarise Jack Reacher: Never Go Back, is the kind of film you'd be happy to watch with your family or friends on a night in. A cracking film where you cheer on the lead as he kicks ass in search of justice. It's no classic in my opinion but I guess that is an opinion only time and the box office will tell. I give it a 3.5 out of five, which is a shame as it just narrowly misses that extra half a star.