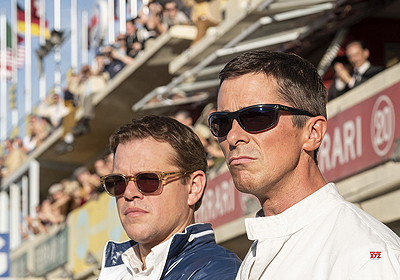 Even if you don’t particularly like car racing competitions or mechanic engineering, Le Mans ‘66 will leave you breathless and with the need to know more about the historical competition between Ford and Ferrari back in the 1960’s.

The film focuses on the friendship between Ken Miles and Carroll Shelby during Ford’s attempt to enter the car racing scene and best Enzo Ferrari’s perfect and fastest cars.

Directed by James Mangold, Le Mans ‘66 is a really fast paced movie filled with adrenaline. Since car racing is a huge part of the film, the camera either follows the race using aerial shots or concentrates on Miles talking to himself or showing extreme concentration on his car to understanding it from a mechanical standpoint in order to make it perfect for the race.

As the story moves quickly between the race preparation and the competition itself, the movie doesn’t feel like it is dragging along. The action is ever present and the story immediately reaches its pinnacle with the most important 24h endurance race in which Miles is competing for Ford. Throughout the feature Adrenaline and rush are mixed together with comedy to create and explosive and entertaining film that leaves the audience almost breathless.

However, although motor racing is a big part of the plot, this is not a movie about powerful cars and powerful men. It is a story about profound friendship, respect and fighting for what you believe in.

Both Shelby and Miles have their share of regrets. Shelby was a pilot himself, but is forced to stay on the sidelines because of a heart problem. Miles is a veteran from England who has a great talent in fixing cars, loves racing but is well known for his bad attitude. As two headstrong men, who had to fight their way through life, both have to set aside their pride in order to reach their goals to drive in Le Mans and win the race. Their friendship and respect for one another is what keeps them motivated against Ford’s executives who only want to profit and don’t really understand this dangerous sport.

Both Christian Bale and Matt Damon’s performances are outstanding, Bale is completely committed to give justice to Ken Miles and his rare talent in deeply understanding each car he is driving. Although Miles loves his job and car racing, he also has a deep sense of duty towards his family. Bale’s performance is honest and he showcases Miles’ strength and weakness effortlessly.

Matt Damon is also great as Carroll Shelby a man who is forced to give up on his career too soon but that is still able to use his talent in a different way and still be involved in motor racing. The chemistry of both actors with one another is beautiful to see on screen. The deep friendship that runs between them feels real and not staged. Their camaraderie keeps the audience invested in the story and gives a soul to the plot making the film even more interesting.

The rest of the cast ensemble, especially Caitriona Balfe, Noah Jupe and the Italian actors portraying the Ferrari group did a fantastic job in supporting the two protagonists and bringing to life such a lively and funny script. As a movie that takes inspiration from real events, Le Mans ‘66 is a tribute to two men who made history by doing the impossible and believing in themselves. It is a story about never giving up on your dreams no matter how many people try to stand in your way.