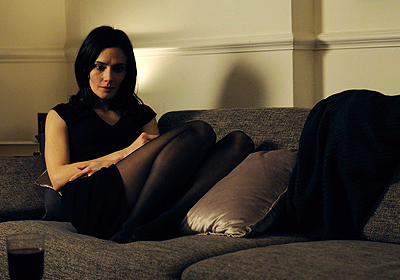 "solid drama led by two exceptional performances, an intimate style that allows us to fully engross ourselves in the character and story"

Love is a strange thing. It can bring out the very best of us, making us do wonderful things to make those we care about happy. It can bring out the very silliest of us, making us do incredibly daft things as a way of showing our devotion to someone. But love also has a darker side to it, sometimes pushing people to commit questionable acts as a means of proving just how far they are willing to go for someone’s affections.

This brings us to the subject of today’s review, Love Me Do a film which shows us this darker side of this supposedly wonderful emotion, and the sometimes worrying extents that people will go to make someone happy.

Investment banker Antonia and struggling actor Max embark upon a romantic relationship that from the get-go is far from ordinary. As the relationship continues to blossom the two adopt increasingly extreme measures in order to give each other a sense of purpose and to make each other happy, measures that will ultimately have shocking results.
The film is a tightly scripted two-hander for the most part, with lead actors Rebecca Calder (as Antonia) and Jack Gordon (as Max) being the sole actors in the film for 95% of its runtime. The performances from the two leads are stellar, coming off as incredibly naturalistic, with the chemistry between the two creating the impression that they are a real couple, and we have been invited to observe their lives.

While the leading pair is excellent together, individually their performances are certainly fascinating to watch in their own right.

Calder is outstanding as Antonia, creating a multilayered character that is fascinating to watch develop. Antonia Initially seems to give off a kind of a sort of “femme fatale” vibe, confident, somewhat manipulative and cold, but it is clear that this mysterious exterior hides a much more tragic figure, one bitter and broken by her experiences in life, jealous of others and desperate to achieve success.

Gordon’s Max is a much less complicated character, but nonetheless an interesting one. Max is a struggling actor, desperate to make it in the acting world, yet finds that success, and indeed acting work, continues to elude him. The core drive of Max’s love of acting though is his love the kind of power that you get by fooling people into believing he is someone else, a desire that ultimately drives him to commit acts in order to please Antonia.

The film’s intimate nature extends to its presentation, shot largely with handheld cameras and taking place entirely within the walls of Antonia’s luxury house in London, giving the film the feeling of a play, or like we are a third person in the house with the characters. This choice of setting and presentation ultimately becomes one of the films strongest points, with the intimacy becoming increasingly stifling and claustrophobic as the story grows darker.

The pace of the film is very slow, deliberately so, allowing us to fully “get into bed” with the characters, to understand their motivations and their feelings. This slow pace is both a blessing and a curse for the film in my view, on the one hand, it does allow us to develop a greater understanding of the film’s themes, but it can also lead to long stretches where it feels like very little is happening which may leave some viewers feeling bored.

The lead characters, while fascinating to watch and brilliantly acted, can sometimes come off as somewhat unlikeable and unsympathetic, while this is perhaps intentional given the avenues that the story drives down, it does sometimes make it difficult to care for them in the more quiet moments, or generate sympathy when they do go down those more extreme paths, even when we fully understand their reasons for committing such actions.

Overall Love Me Do is a solid drama led by two exceptional performances, an intimate style that allows us to fully engross ourselves in the character and a story that, while slow in parts, is certainly intriguing enough to keep the viewer invested till the end credits roll around.

In short, Love Me Do is a fine film that is bound to please those looking for a slightly darker alternative to the usual tide of dull romantic comedies and sappy romantic dramas that regularly fill our cinema screens.