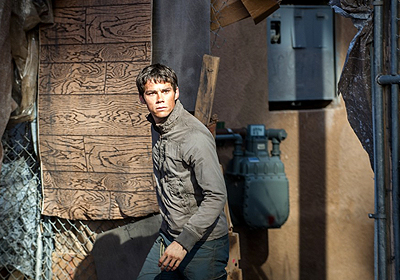 I, like most people, remember the first Maze Runner as a fairly decent addition to the teen angst sci-fi genre but with a bizarre nonsensically stupid ending. So the hope here is that the sequel reconciles that dilemma.

‘The Scorch Trials’ picks up almost immediately after the first movie, with the survivors of the maze aboard the rescue chopper as it arrives at the mysterious base of their rescuers as they are taken in by the highly suspicious rebellion group.

All is not what it seems - otherwise we wouldn’t have much of a story - and our plucky gang are forced to flee into The Scorch (which is the general term for, well, the planet, I guess) in search of a better option. Or something like that - they don’t really have a plan.

But in response to my first question: no, the nonsensical ending from the first movie doesn’t get any more logical. Spoilers for the first movie to follow: Hey, this is a review of the sequel, so what do you expect? The Maze Runner ended with possibly the least logical explanation for the events that took place within the maze there could be. The sun had scorched Earth and people had turned into raving zombies and the maze was designed to help somehow(?). Except then an almost meaningless twist that happened way too suddenly meant that maybe this wasn’t true and we were left with a big question mark.

Tragically, the raving gibberish turns out to be true. The world has turned into ‘Resident Evil: Extinction’ and WCKD have taken up the most bizarre methodology they could think of to try and combat the problem. And I’m afraid I couldn’t get past this. Much like the first movie though, it largely works really well. The Mad Max meets Fallout landscape is stunningly realised and the pockets of “civilisation” the kids encounter are all varied and interesting. The problem is that we’re stuck with what is still ultimately a very stupid plot hanging over the proceedings like a tidal wave threatening to drown the movie under it’s nonsense.

Weirdly, Scorch Trials is also a total left turn from the first. They really have next to nothing in common besides apparently taking place in the same universe, and, much like the first the premise, characters and beats of the story work great, it’s just the story itself that lets it down. Which means if you liked the first film, you may not like this one, because they’re both very different creatures.

You know who the heroes and villains of this story are, I’m just not sure why I’m supposed to care. WCKD are evil, sure, but what’s the point? A villain with noble intentions is always interesting, but there’s a limit to my suspension of disbelief.

It’s a damning indictment of the series, after having seen both films, that I wouldn’t lose any sleep if I missed the next.

I can, however, recommend this for its scenery and world-building but wish we had a better story to explore this world with and, ultimately, was bored stiff.