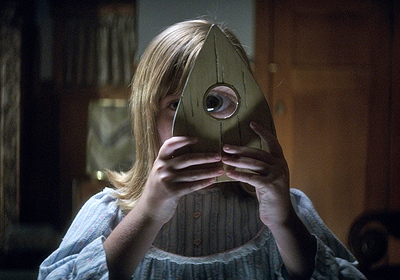 "isn’t too gory and has enjoyable frights, it’s a good film to watch with some friends over Halloween"

Ouija: Origin of Evil is a prequel to Ouija and the second film in the series. Set in 1967, the film revolves around the Zanders family. Alice, played by Elizabeth Reaser, the mother of the family holds séances for people to contact the dead. However, they are faked via sound effects and other devices. As well as using her two daughters, Pauline (Annalise Basso) and Doris (Lulu Wilson).

Their father died prior to start of the film, Pauline is the older of the two, around fifteen/sixteen years old and Doris being around twelve years old. Pauline sneaks out of the house and goes to a friend’s house where they play the game, Ouija, with a group of friends.

The game is stopped when they are caught in the act of playing the game and Alice picks up Pauline from the party. Whist shopping Alice sees the Ouija board game and buys one to use in the scams. Alice doesn't get any response from the Ouija Board when she does it. However, Doris is taken over by the sprites and answers the questions Alice is asking downstairs but Doris is upstairs with Pauline. Pauline doesn't realise what is happening and dismisses it as Doris talking to herself. Hence, the start of the horror element of the film. Alice find out that Doris can tune into the sprits, one of which being her husband and their father; Roger (Michael Weaver) who uses her in the séances.

I haven't seen the first film, so I don't have a point of reference to make. However, this film does have some good scares albeit predicable ones but still have great effects on the audience. It's a not a great horror film but an ok/good horror film. You have seen all this before in previous horror films and it does use a lot of elements from the horror classic The Exorcist.

Director Mike Flanagan use all the tricks in the book with this film and there are some shocks you don’t expect. The use of the Ouija Board lens is great with seeing things in corner of your eye, also one scene that plays with the childhood fear of what’s at end of the bed. The sound, score and editing are great in this film. They really build up the scenes even thought you know what’s going to happen you still get frightened by it!

The cast is good, Doug Jones of Hell Boy fame is great as the main ghoul in this film and Lulu Wilson is so sweet and innocent at the start of the film but can terrorise you with her stillness and cold gaze during the end of the film. There are some point of the film when my friend and I were thinking don’t go down there or don’t put your hand there but what I liked about the film. It was old school. It isn’t too gory and has enjoyable frights, it’s a good film to watch with some friends over Halloween.