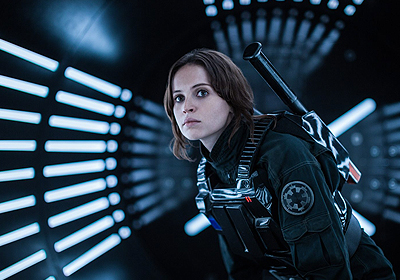 Rogue One: A Star Wars Story is the first in Lucasfilm’s new regime of Standalone Anthology films furthering the Star Wars Universe, and it doesn’t disappoint. From start to spectacular finish you feel the dread and urgency of the mission - said mission we already knew because it is described in the opening crawl of A New Hope.

After a brief glimpse of the past, which serves as set up between Ben Mendelsohn’s Orson Krennic and Mads Mikkelsen’s Galen Erso, we follow Jyn Erso (played wonderfully by Felicity Jones) as she's rescued from an Imperial Transport by the Rebels and tasked with taking on a daring mission to steal the plans to the Empire’s super weapon; the Death Star.

As a Star Wars fan, I thought the prospect of not having an opening crawl would have irked me more, however I didn’t miss it, although I do think it could have benefitted from having one, it’s a tough call. I understand them wanting to differentiate from the main Saga, but with cameos from those I think they could’ve incorporated a crawl. Furthermore, I now believe that this IS the prequel we should have got, so when watching the Saga you can forget Episodes I to III and start with Rogue One and then Episodes IV to VII.

The acting is amazing across the board, with the standouts being Jyn, Diego Luna’s tortured Captain Cassian Andor, the reprogrammed Imperial Droid K-2SO (played brilliantly by Alan Tudyk with a dry wit and plenty of sass), Donnie Yen’s blind warrior Chirrut Îmwe and the aforementioned Krennic. You can see that Mendelsohn was having a ball playing the menacing Imperial Director too.

Îmwe is completely badass and we learn he's a former Guardian of the Whilles, which would go over casual viewers heads, but means more to hardened fans.

The technical advances made in this are extraordinary. There is a CGI character (that I won’t spoil here), that I’m glad they had the guts to include, similarly there is a cameo done in the same way that I’m glad they went for because it makes sense for both to be there.

The inclusion of Darth Vader is a master stroke. Whilst his appearance is only peppered in with a couple of scenes, he is utilised brilliantly and further solidifies my point of negating the prequel trilogy when coming at Star Wars with fresh eyes. That said, they did change his suit a bit, with his neck being noticeably thicker, but again it's just a nitpick. It is nothing that stopped his presence from evoking the response it did all those years ago when I first experienced A New Hope.

Whilst I would have preferred Rogue One to have retained the ‘Star Wars Anthology’ moniker, it’s a small criticism to an incredible film: the space battles are thrilling and an incredible feat, enriched by the knowledge that Gareth Edwards and his creative team used unused cuts from A New Hope to blend it together seamlessly, the battle on the beaches is incredible, making this a true war film with real stakes.

Rogue One is a testament to great film making and is thrilling and a pure joy to experience, I had the pleasure of experiencing it in glorious IMAX that adds an extra layer of depth both in sound and picture to a solid film.