The Haunting of Sharon Tate(2019) | The Fan Carpet

The Haunting of Sharon Tate(2019) by Tremayne Miller 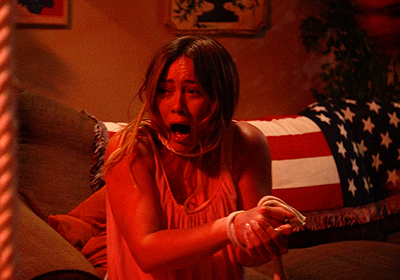 "unjustifiable pig fodder, only for the fanatical-cinema sub genre"

The Haunting of Sharon Tate is one of three films about the late actress scheduled for release this year; there's also Quentin Tarantino's Once Upon a Time in Hollywood starring Margot Robbie and Tate with Kate Bosworth.

The latter film has the support of Tate's sister Debra, and is apparently about her life, and not her death. As for the Tarantino movie it is thought to follow the tale of two actors who are trying to break into Hollywood in the late '60s, yet Charles Manson and the murder of Sharon Tate will somehow find their way into a series of events.

The Haunting of Sharon Tate guesses what might have happened had Tate actually been haunted by premonitions of her murder by a satanic cult beforehand, admittedly an interesting concept.

Deadline reported the movie took its inspiration from a quote that was meant to have come from the mouth of the actress, whereby she spoke of “having dreams about ghosts haunting her house and foreseeing her own death at the hands of a satanic cult."

The film unsurprisingly has gathered controversy since Duff's Tate is portrayed more as a horror movie heroine. Debra in response to the mention of her sister having premonitions says "I know for a fact she did not have a premonition — awake or in a dream — that she and Jay would have their throat cut." "I checked with all of her living friends. None of her friends had any knowledge of this."

Cult leader Charles Manson ordered the murder of Tate to take place, the actress was just 26 years old, and expecting her first child. She was stabbed in her house on August 9, 1969. Folger's Coffee heiress Abigail Folger, Wojciech Frykowski, hairstylist Jay Sebring, and Steven Parent were also murdered that night.

One unusual aspect of the Manson case is the connection to celebrity, when the vast majority of serial killers would target the marginalised in society, in desperation to become famous, Manson submerged himself in the Hollywood scene, with links to Dorris Day (her son Tony Melcher owning the house on Cielo Drive) and the Beach Boys (Dennis Wilson was thought to be a friend of Charles' and a fan of his music).

The film begins in the weeks leading up to Tate's murder, while husband, Roman Polanski is away in Europe. Hilary Duff bares a striking resemblance to Tate, who during the ‘60s played small television roles before venturing in to film. She regularly featured in fashion magazines as a model and a cover girl. Her most well known films are ‘Valley Of The Dolls’ (1967) and ‘The Wrecking Crew’ (1968).

Duff is quoted for saying “(I) had the incredible opportunity of playing Sharon Tate .. in an independent movie. She was an amazing woman and it was a true honour."

She is first seen living the idyllic Californian lifestyle; bronzing herself by the pool, at the same time lapping up that hippie generation, defined by the folk music playing in the background and the sun drench coloured dresses she wears.

Hilary's Tate says she was living in a fairy tale 'through rose-colored glasses' in a re-enacted black and white interview she gives, and then, the tide turns, and the sea mist emerges. Someone has been coming to the door and delivering tapes. Before too long it is made clear the person to have done this is someone who goes by the name of Charlie.

There’s a definite switch in the film at this point, and it ceases to be a biopic homage to Sharon Tate and instead a slasher type movie. This completely unsettled me, and I began to reason with myself as to whether I should continue watching it, yet as both Writer and Actress you feel a sense of duty to.

Pivotal true-to-life references in the film include: the writing of ‘pig’ in blood on the sliding door, when the evening after the butchery of Tate and her friends, married couple Leno and Rosemary LaBianca were found slain in a similar way, with ‘death to pigs’ written on the wall.

Manson, a criminal master of manipulation, lived in squalid conditions on a ranch, where through a combination of: ‘free love’ mantras, LSD and lessons on How To Win Friends And Influence People,’ a book he'd read by one Dale Carnegie, and leading not a dissimilar lifestyle to a pimp, managed to gather followers, and put them under his spell. He then, in a position to implement brainwashing, incited a prophesied race war, a prediction made in the Beatles song Helter Skelter. Manson claimed coded messages were being sent to ‘his made up family’ through songs, most notably Helter Skelter, as is suggested in the film by the Caretaker.

Manson still continues to incite interest today, he was not present where any of the murders took place, yet was able to convince followers, specifically young women, to carry out these heinous crimes on his behalf.

The questions to remain include: ‘How did he gain followers? Why were women in particular drawn to him? And what was it about him that made these followers carry out his instructions of killing?

In conclusion, true crime fans will have to wait until all three films have been released till they make their final decision on whether or not justice has been made to the aspiring fairy princess with gossamer wings, Sharon Tate is quoted as saying "I'd like to be a fairy princess — a little golden doll with gossamer wings, in a voile dress, adorned with bright, shiny things. I see that as something totally pure and beautiful."