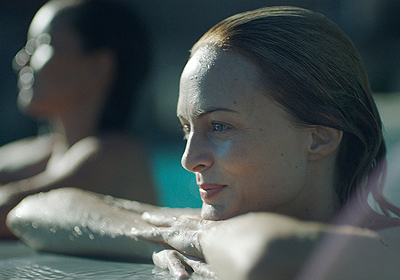 "Ultimately, The Rest Of Us is a film about love, understanding and perseverance as the four leads have to learn how to be together and crucially accept the help that is offered to them"

Directed by Aisling Chin-Yee, The Rest Of Us stars Heather Graham and Sophie Nélisse as a mother (Cami) and daughter (Aster) respectively, as they try to come to terms with life following the sudden heart attack and drowning of Craig; Cami’s ex-husband and Aster’s Father as they find themselves befriending the woman labeled as a homewrecker; Rachel (Jodi Balfour) and Talulah (Abigail Pniowsky), Craig’s widow and young daughter.

Expertly written by Alanna Francis and Mark Van de Ven and directed by Chin-Lee, The Rest Of Us is well acted, with the chemistry between the four leads being a greatfocal point to the film, as the mother-daughter duos contend with their grief and complicated relationships with one another as secrets are revealed that changes the dynamic for the duos as they have to adapt to their new normal.

The uneasy alliance and co habitation of the four women is interesting to watch, as Cami not only has to deal with her rebellious daughter; Aster, Aster has problems of her own; some of her own making, Rachel’s pride seemingly gets in her own way as she seemingly doesn’t like to accept the help that she is being offered as Cami takes her under her wing.

Graham’s Cami is believable as a mother who becomes a sudo mother figure to Talulah and Rachel, with Rachel being much younger than her, she is closer to the age of Cami’s daughter Aster, she takes Rachel under her wing to teach her how to get on with life without the late Craig.

The film doesn’t work without the believable central performances, there is no one real stand out, since the central four are what you are watching, there is no weak link, as they take you on the journey of self discovery and learning how to accept help and continue whilst grieving the loss of a loved one. Ultimately, The Rest Of Us is a film about love, understanding and perseverance as the four leads have to learn how to be together and crucially accept the help that is offered to them.