French actress. She began her acting career in French cinema, coming to attention after she won the Trophée Chopard Award for Female Revelation of the Year at the 2009 Cannes Film Festival and was nominated for the César Award for Most Promising Actress for her performance in The Beautiful Person (2008).

Since then, she has appeared in major Hollywood films including Inglourious Basterds (2009), Robin Hood (2010), Midnight in Paris (2011) and Mission: Impossible – Ghost Protocol (2011). She was nominated for the César Award for Best Actress for her role in Farewell, My Queen (2012) and in 2013 she was awarded the Palme d’Or prize at the Cannes Film Festival for the film Blue Is the Warmest Colour. In 2014, she was nominated for the BAFTA Rising Star Award and the César Award for Best Actress. The same year, she starred in the films Beauty and the Beast, The Grand Budapest Hotel and Saint Laurent. She will appear in The Lobster and in Diary of a Chambermaid, with both films projected for release in 2015. 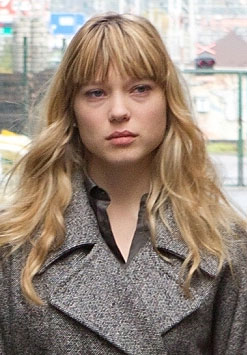