Though Peña has been a regular in independent productions since 1994, his breakthrough performances came in 2004 in two Best Picture Oscar-winning Paul Haggis penned films, Million Dollar Baby and Crash. The latter was also directed by Haggis, while the former was helmed by Clint Eastwood. Though both films are critically acclaimed, Peña received attention for his particularly emotional performance in Crash. The following year, he appeared on the Golden Globe winning series, The Shield. In 2006, he starred in Oliver Stone’s film based on the September 11, 2001 attacks, World Trade Center. He also had a small role in Alejandro González Iñárritu’s Academy Award nominated and Golden Globe-winning film Babel. This gives him the rare distinction of having appeared in three consecutive Oscar nominated films. He recently starred alongside Mark Wahlberg in Shooter as novice FBI agent Nick Memphis.

In 2006, Peña performed in the HBO film Walkout playing the part of Sal Castro, a Mexican-American high school teacher who inspires a group of East L.A. high school students to fight for Chicano rights. 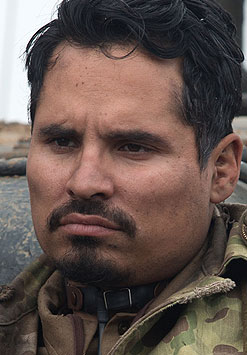