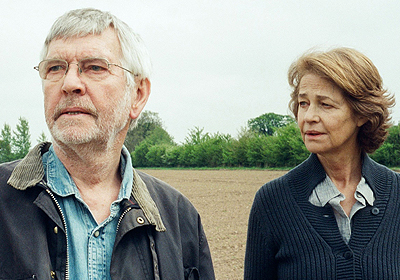 "Praise will be heaped onto Courtenay and Rampling, both of whom deserve plaudits for their performances"

Director Andrew Haigh made a name for himself in 2011 with Weekend, a drama following a 48-hour romance between two men after a one night stand. Haigh was praised for his subtle direction and intimate portrayal of the relationship, and his follow-up is another deeply moving portrait of the bond between two people, despite having a wildly different setup.

Based on a short story by David Constantine, 45 Years examines (with terrifying precision) the relationship between a retired couple, expertly played by Charlotte Rampling and Tom Courtenay, as their seemingly unbreakable union is shaken to the core.

Rampling is Kate Mercer, wife of Geoff (Courtenay), forming an elderly pair that live a seemingly comfortable life on the featureless Norfolk Broads as they prepare to celebrate their 45th wedding anniversary. However, a letter addressed to Geoff from Switzerland promises to change everything. The letter informs him of the discovery of an ex-lover's body, preserved beneath the ice while the pair had been climbing a glacier half a century ago. Although the existence of an ex from before Kate and Geoff met isn't a revelation, it opens up old wounds and over the course of the film, this butterfly develops into a full-blown cyclone, ripping its way through their marriage.

The letter changes Geoff, causing him to become insular, losing sight of what's right in front of him. On thinking of the girl's perfectly preserved body he remarks, "She looks just like she did in 1962, and I look like this." It's the first piece of symbolism in a film wrought with subtle gestures and images. Haigh's masterful direction allows 45 Years to tell its story not through bombshells and exposition, but with glances or seemingly throwaway lines. The film looks at relationships the way humans actually do focus on the little things, seeming trivial at first, but about one that, if left untended, can build to an almighty crescendo.

Praise will be heaped onto Courtenay and Rampling, both of whom deserve plaudits for their performances. The pair are passionate but restrained; always close to exploding but they never quite do. Both have a fine acting pedigree but are largely unknown when compared with say Judi Dench or Maggie Smith. This allows them to achieve a sense of naturalism that wouldn't be possible with the likes of other A-listers. This is a casting choice that works wonders for the film, but might keep it from breaking out of arthouse territory and cashing in on the 'grey pound' that has helped so many films recently.

45 Years is a wonderfully brilliant study of a relationship that everyone should take heed and look at. It's a slow-burner that might not initially capture the imaginations of many, but will sit in the minds of all who experience it. Rampling and Courtenay both put in awards worthy performances to match any in their already accomplished careers, and Andrew Haigh marks himself as a filmmaker who, rather than being one to watch for the future, is one to watch right now.