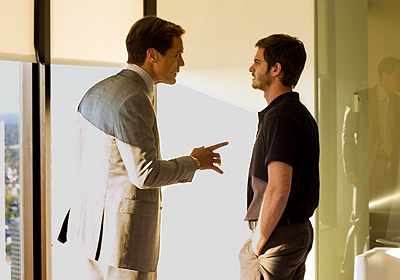 "Class actors do their best to shine through an average, yet engaging tale of corruption"

Writer, director Ramin Bahrani toys with our emotions from the get go in latest feature 99 Homes. As we see many couples, families and elderly folk get thrown out of their homes due to lack of mortgage payments it quickly becomes apparent that there is a higher force at play here than just the banks. Scenes of fake schemes for quick cash, cutting deals in the hope that these people will keep their beloved homes are executed in such a way that is at times unbearable to watch. Honest worker and father Dennis Nash (Andrew Garfield) becomes the latest victim of the ruthless, greedy real estate broker Rick Carver (Michael Shannon).

Realtor Carver’s un-sympathetic, cold nature is outlined within the first 30 seconds; a man has just committed suicide instead of accepting that his home was to be taken off of him just moments later. The un-fazed Carver wastes no time and promptly ushers the rest of the family out of their house onto the now ‘banks’ front lawn. Through a rapid montage we see a number of people hand over their keys, forfeiting their lives to the government, until we stop at our protagonist. Being shunned just a day before in court and told he had 30 days to save his house or else, Dennis is forced to vacate with his mother Lynn (Laura Dern) and young son, Connor (Noah Lomax).

It’s the sheer drama that attracts our two leading men to one another – drawing them in closer together, corrupting a solid, kind hearted man in the process. Quick cuts and precise story-telling work to a certain degree, but even after the near 2 hours of running time, 99 Homes never truly felt as if it got to where it wanted to go. Focusing heavily upon predictable narrative techniques rather than character development stunted the films overall message. This is a terrifying look at the poor parts of America. It is absolutely gut wrenching to see people driven out of their homes and it is near impossible to stop rage creeping in when it comes to the state, banks and con-artists. Above all, underlining tones of anarchy emerge from this tale of corruption. Carver shows us how the system is constantly coning the average Joe, so why not con it back? The way in which he goes about it is inexcusable albeit, one cannot fault his near flawless business tactics.

The villainous Carver nearly always dons a beige suit which juxtaposes his devilish nature, bringing forth yet another terrifyingly strong ‘Ice Man meets General Zod’ performance from Shannon. Bahrani also gives Garfield the chance to show us he is much more versatile than teen Peter Parker prancing around in spandex; proving one convincing struggling father, riddled with guilt and consumed by shame. As hard as he tried to make an honest man of himself, a clear life lesson appears as Nash becomes devoured by Carver’s corrosive nature transforming into the person he hated the most in order to survive in this cut throat world he resides in.

Two class actors do their best to shine through an average, yet engaging tale of corruption. Heart-wrenching, disturbing and somewhat predicable - 99 Homes is a brutal, blood-splattering drama that doesn’t hold back.