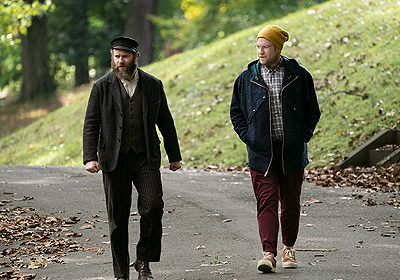 "a comforting movie with a lot of heart. Helmed by two greatly different performances by Seth Rogen, this is definitely one film to relish"

Fredric March. Jeremy Irons. Leonardo DiCaprio.   These are all men who have had celebrated performances playing dual roles such as the torn Dr Jekyll and Mr Hyde, murderous twins in Dead Ringers and The Man in the Iron Mask.

Now Seth Rogen is tackling two different roles playing a great-grandfather and a grandson in An American Pickle.

An American Pickle tells the story of Hershel Greenbaum, an immigrant who wishes for a better life for himself, wife Sarah and their unborn child. However, one fateful accident leaves him accidentally brined in pickles. Discovered 100 years later, Hershel is left in the custody of his great-grandson Ben, an app developer still not over the loss of his parents. There is a small kinship between the pair but when Hershel starts to express his dated views and thinks Ben is not living up to his potential, the distant relatives fall out. Can they reconcile before it is too late?

Seth Rogen tackles the two roles of Ben and Hershel greatly; although he really shines as the confused older man trying to adjust to the new world. Ben is a nice enough foil for Hershel but he is basically every Seth Rogen character ever made until the very end where his layered pain is uncovered. As Hershel, an immigrant from Ashkenazi, Rogen has to have a different energy. Hershel has to be both confused, confusing, curious and cantankerous.

There is an underlying tenderness to An American Pickle. It speaks to the one communicable emotion throughout generations: Grief, loss and faith. As Ben and Hershel bond over their Jewish heritage, with the former having given up the connection, the movie finds its strength. The exploration of these similarities, that binds us to our ancestors, keeps the film feeling fresh, beating with sincerity.

The biggest problem with An American Pickle is that it is too predictable. If I decided to write a movie about my old timely great-grandmother returning to these modern times and reacting to the world of today, it would follow a pretty similar story-line. This predictable storyline shows its weakness roughly half-way through. Whilst it grows emotionally, throwaway comic bits about social media, the state of politics today and crabby old men feel a little stilted.

Still, An American Pickle is a comforting movie with a lot of heart. Helmed by two greatly different performances by Seth Rogen, this is definitely one film to relish.