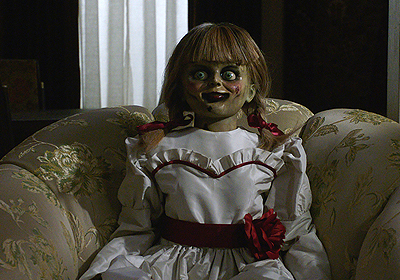 Babysitting.... a pretty straight forward job that involves looking after a young child; making sure they are fed and watered and making sure they go to bed on time whilst their parents go out for the evening.... pretty standard stuff right? Unless those parents happen to be Paranormal Investigators who have a room of cursed objects and your friend who you invite over decides to break into said room, mess around with that darn Annabelle doll and EVERY SINGLE ITEM in THAT room and unleash a Hellhound that stays outside the house to prevent them from escaping the other horrors that await them. The three young girls then have to fight for their lives in one unforgettable night of terror at The Warren's.

Filmmaking icon, James Wan has written a cheeky little entry into The Conjuring Universe, it's clearly an opportunity to showcase some potential Spinoff's which in all honesty have been a bit hit & miss with the likes of The Nun and The Curse of La Llorona doing above and below average at best.

But that doesn't stop Gary Dauberman from directing an above average horror movie with typical (but still damn effective) jump scares which add to the tension throughout as you have no clue what terror lies around the corner for these innocent young girls who are just trying to survivethe night . Michael Cimino adds some much needed comic relief to proceedings as Bob; the typical teen with a crush on the babysitter who kinda goes all out to impress her.

However, Annabelle Comes Home does take its sweet time to build up and I think for a film that is not so long, (clocking in at 106 minutes) you should hit the ground running but the cameos from The Warren's themselves; Ed and Lorraine (Patrick Wilson and Vera Farmiga respectively) does make an attempt to soften that blow.

As for the girls themselves, this is definitely Judy's movie, as McKenna Grace is truly the standout as the Vulnerable Judy Warren who has a dark secret for her own and Katie Sarife plays well as Daniela, a young girl trying desperately to make up for her past mistakes. Sadly though, the Babysitter herself Mary Ellen (Madison Iseman) suffers as I found her character to be not as compelling as the other two were, they had more interesting stories to follow. The film has a decent score that keeps an uneasy tension throughout.

The ghosts, demons & monsters haunting these young girls do stand out in their own individual ways and I do see some of them having their own movies hopefully in the not too distant future.

Annabelle Comes Home is a great Late Saturday Night horror that delivers on scares with some decent characters (both living and dead) and is a welcomed edition to the franchise. Very slow to kick off but it makes up for it with its decent climax and promise of many more adventures to come within The Conjuring Series.