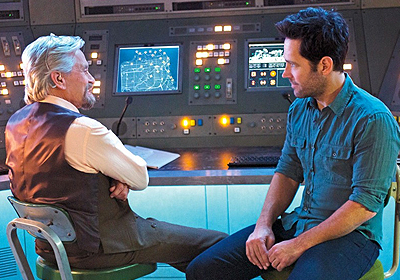 "Whether you know the back story or not, this is a film that anyone in the family can enjoy and a personal highlight of the summer"

So, the final film in Marvel's Phase 2 is upon us. Was it the perfect end or was there a bug in the system?
Let me start by saying that this is a different kind of Marvel movie, whilst keeping to a similar mould to what we've already seen (if that makes sense). Anyone that has been keeping up with the film as it went through development will know that it experienced a lot of change along the way, not least when it lost its original director Edgar Wright. Some doubted that Peyton Reed could deliver the high standard that was expected.

As a movie goer and a Marvel fan, I can safely say such worries drift swiftly away within the first few minutes of the film. It’s clear that there has been a lot of passion poured into making this, and it’s been given the due care and attention it deserves. A lot has been made of this being a ‘heist’ movie and whether or not this would work within the Marvel Cinematic Universe (MCU). The short answer is that it does, and it does so beautifully.

Both Hank Pym (Michael Douglas) & Scott Lang (Paul Rudd) are set up well and neither feels like they have been added purely for fan service. Another highlight is Hope Van Dyne (Evangeline Lilly), who not only is a great supporting character but is a strong female role that hasn't been included merely as a love interest. There is also a great supporting cast in Michael Peña, T.I. & David Dastmalchian. Whilst their roles are comparatively small, they're still crucial to the heist element of the movie and add a small element of comic relief.

In Ant-Man, it feels like the actors have done their homework and not only have an appreciation but a real respect for the history of the characters involved: they may not be household names that Iron man or Captain America are, but there's still 40+ years of history of the Marvel Universe to draw from.

Story wise this feels like a Marvel movie, part over the top action, part tongue-in-cheek comedy and very respectful of its source material. Darren Cross/Yellowjacket (Corey Stoll) makes a convincing Antagonist, and doesn't feel like your usual moustache twirling comic book bad guy. There is also a huge amount of respect for the background of each of the central characters & whilst there are perhaps a few pacing issues they are easily forgiven in the overall story.

There's no way you can review Ant-Man and not talk about the amazing CGI -- its second to none. While Avengers Assemble was stunning, this will have you believing a man can really shrink to the size of an ant. This part of the character’s mythos has the potential to ruin all its potential if not handled correctly, yet so much care and attention to detail has been put into it that it simply shines through.

In summary, Ant-Man is a fitting conclusion and jumping on/off point for Phase 3. The playing field has been largely reset by the upcoming Captain America: Civil War, and with so much to expect from that and the two-part Avengers Infinity War, the addition of at least one or more new Avengers/Secret Avengers movies are very welcome.

Whether you know the back story or not, this is a film that anyone in the family can enjoy and a personal highlight of the summer. Also, I defy anyone not to have a soft spot for "Anthony" by the end of the film.