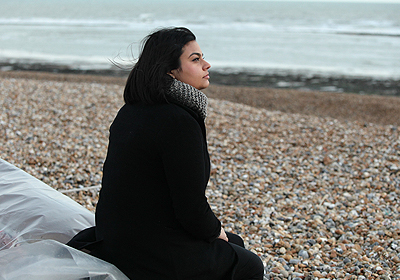 Telling the story of a British girl of Pakistani origin, Arifa is a slight yet at times amusing and moving comedy drama from director Sadia Saeed.

Set in present day Crawley, the titular character (Shermin Hassan) is a 28 year-old somewhat struggling with life. Opening with a break-up and a bizarre rant at her date, Arifa we discover also has issues with her financially unstable father and rarely smiles. In a smart meta sub-plot that ends up being somewhat undercooked, she is also an aspiring novelist who draws on her own life.

That includes meeting up with handsome Italian Riccardo (Luca Pusceddu), but even he is not all that he might seem to be.

There’s some gentle comedy to Arifa’s journey which is found in the deliberately awkward dialogue. This overcomes the somewhat stilted performances and characters that are at times unrealistically curt to one another.

This is the case with Arifa herself who ends up being an oddly sympathetic character come the gentle, understated conclusion. It’s not a film that breaks any new moulds or boundaries but serves well enough as a calling card for writer/director Saeed.