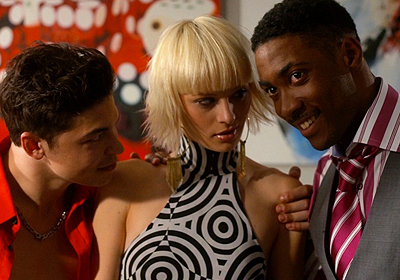 "It’s not exactly hard to keep up, but it is pretty difficult to care when the characters are either this volatile or dull and the plot this ludicrous"

Brash Young Turks opens with two random hoodlums beating up a young drug dealer called Terell who is then saved by another random hoodlum, Dave. The boys, along with a girl named Shaz, become a trio of best friends after Dave is stopped from committing an arson attack on his abusive stepfather and mother. As set ups go, it’s pretty contrived, which implies the tone for the rest of the film.

Ten years after this initial meeting, Terell (Paul Chiedozie) is pulling in the cash working for a property tycoon in London, while Dave (Charlie MacGechan) is an undefeated boxer (who we never actually see train or, indeed, box) and, along with Shaz (Kimberley Marren), are living in a well-to-do home, which is a far cry from their urban childhoods.

When Terell becomes involved with Mia (Melissa Latouche) via another ridiculously and unnecessarily contrived meeting, the dynamic in the group is affected and what unravels is a film that tries to intersect various lives but keeps going off on tangents involving ridiculous subplots, bizarre character behaviour and sub-par performances. This final point is perhaps a tad unfair on the young cast. They’re not helped by some truly awful dialogue (i.e., “You’re the most realist person I know”) and at times feels as though they’re almost reading the lines in spite of themselves.

It’s not exactly hard to keep up, but it is pretty difficult to care when the characters are either this volatile or dull and the plot this ludicrous.

By the time the whole thing comes to an end, you struggle to really care for anyone involved and only Melissa Latouche comes out of it with any real credit.