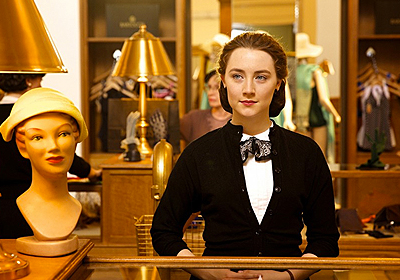 "The story is a very moving and powerful one; it develops in tiny baby steps and allows the audience to fully enjoy every small thing"

Set in the 1950s the film is presented as a love story which intertwines with the beginning of a new life overseas, away from the familiar places, family and friends. The film is an adaptation of Colm Toibin’s bestseller and has a central character an Irish girl who decides to try her luck over the pond, in America, after realising that not much seems to be on the horizon for her if she remains in her hometown.

At the beginning we are faced with a passive and somewhat scared Eilis, a character with which it’s quite hard to relate. Saoirse Ronan beautifully portrays the lost girl from a small town who needs a bit of a push to stand up for herself. Probably if it wouldn’t have been for her bigger sister Rose (Fiona Glascott), who was sort of second maternal figure, she wouldn’t have taken that leap of faith to begin with.

However, she does and she ends up sailing to New York to meet with the priest who has helped Rose find a job for her little sister. It’s Father Flood (Jim Broadbent) who will act as one of her guides in New York. But he isn’t the first one. The very first is a more experienced woman who was returning to America after a short visit home: “Don’t look too innocent girl! Put some rouge on, and some mascara! Don’t be pushy. Think like an American! You have to know where you are going.”. Little did Eilis know that someday she will act as someone else’s first support on their way to a new life.

Once she arrives, Eilis gets to live with a very sarcastically entertaining landlady (Julie Walters) who has more than one young woman living with her. All of them illustrate different types of characters and eventually end up warming up to Eilis. She also starts to work in a department store and, thanks to Father Flood, eventually starts to go to accounting night classes. However, she is homesick and the feeling of loneliness doesn’t leave her. Because of that, she is somewhat incapable of connecting with the surrounding world.

The change is brought on by an Italian man she meets at a dance night. Tony (Emory Cohen) is absolutely taken with her “All I want to do is travel with you home. No food, no talk, no nothing. Just that, otherwise it will be too long!”. The impact he has on her new life is huge and the difference can be spotted immediately.

But as it usually happens in life, when everything seems to go well and settled, destiny comes in to prove us wrong. For Eilis it's a huge blow as she finds out her sister has passed away. Even more heart-breaking is the fact she won’t be able to attend the funeral. Nevertheless, as soon as possible she takes a boat back home only to be faced with a very difficult and possible life changing decision.

The story is a very moving and powerful one; it develops in tiny baby steps and allows the audience to fully enjoy every small thing. Brooklyn sort of adapts to its time, which is kind of hard to do nowadays. The dresses, the atmosphere of dances and the way the characters interact might make some want to be a part of that period.

Emory Cohen as Tony is a very interesting mix of vulnerability and decisiveness. He knows what he wants and doesn’t hesitate. Saoirse Ronan makes Eilis blossom as time passes. She creates a strong young woman who takes a while to discover what she fully wants. Wisdom is brought in different ways by Father Flood and by Miss Fortini (Jessica Paré) and the amusing moments by most of the cast.

It is a film that underlines the importance of family and the struggle that comes from being away from yours. Brooklyn is that sweet and funny sort of movie that will make you pause your hectic life and remind you to enjoy those around you.