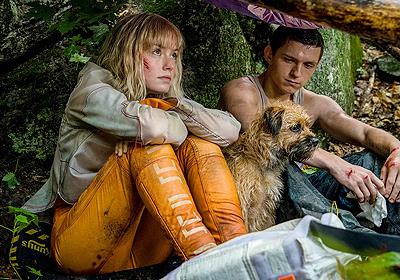 "The premise for this kind of sci-fi story is quite interesting, especially when describing such a different reality in a distant future"

Based on Patrick Ness’s The Knife of Never Letting Go, Chaos Walking is a dystopian reality in which women don’t exist and men have to constantly live with their thoughs shared out loud in a stream of images and words broadcasted by the Noise.

The premise for this kind of sci-fi story is quite interesting, especially when describing such a different reality in a distant future, however, the release for this particular film has been postponed and some reshoots were involved, Chaos Walking doesn’t quite reach the end result hoped.

The story is told by Todd’s point of view and the audience follows this young man who seems to struggle to keep his thoughs at bay. This is difficult for all the men of this dystopian reality because of the Noise, some sort of alien entity which reveals all their thoughts out loud in the open for everyone to hear and see.

Todd seems to struggles the most with it and has to constantly remind himself to keep quite, whilst the rest of the village, called PrentissTown, is in many ways mind controlled by their mayor, who made a weapon out of his noise.

Everything changes when Todd discovers a crashed Scout spaceship and Viola, a woman, as the only surviver of the crew.

Chaos Walking was supposed to be release in March 2019, however due to a poor screen test and some reshooting scheduled, its release got pushed to April 2021. Unfortunately, the finished product, although with potential, still seems a work in progress.

The plot itself is confusing and has multiple holes in the narrative. The audience is launched head first into this new world without any preamble. We are only told that it’s the year 2257 AD and women don’t exist anymore. The more we follow the story the less we understand where it is set and especially what is the quest tasked to the main characters.

Some things find an explanation throughout the story, but by the end, it is still not enough to help you find an emotional connection with the characters.

The cast ensemble is made out of some of the most talented actors Hollywood has in its roster, but even their performances cannot save the final result; Tom Holland, Daisy Ridley, David Oyelowo, Mads Mikkelsen, to name just the main characters, all brought their best on screen. However, the unclear plot line and purpose of the movie make their effort almost disappear and each character’s storyline remains blurry and their purpose is never fully clear.

What is also slightly outdated is the concept that a man sharing his thoughts and feelings is considered weak. Although the film tries to show that in the end Todd is stronger because of the Noise he cannot control, creating the polar opposite nemesis of Mads’ character Mayor Prentiss, who uses the Noise to brainwash his town, every character sees this anomaly as an affliction that needs to be hidden from everyone.

Putting this toxic concept of “men cannot be vulnerable” in a film released in 2021, seems to be a bit of a backward step in movie making and even all the efforts to show that in the end Todd can have his revenge, still fell short because of the many holes in the plot.

Chaos Walking is a film that had potential to be something different, a new young adult dystopian world that could have been interesting to develop. However, although the cast brought to the screen their best performances and commitment to their characters, the script didn’t quite live up to the expectations.