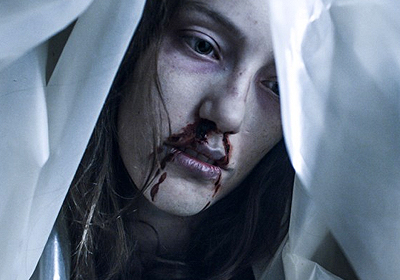 British cinema has a long and proud tradition of horror. From the colourful bloody classics of Hammer Films, to highly acclaimed works like The Wicker Man (1973) and most recently to the wickedly inventive works of cult director Neil Marshall who brought us Dog Soldiers (2002) and The Descent (2005). The subject of today’s review Dark Signal is brought to us by Mr Marshall, albeit in an Executive Producer capacity, yet providing us with a fun effective little supernatural slasher flick.

The plot follows Laurie and Ben who are celebrating the final night of their late night radio show, before the station switches to digital and they are out of a job, inviting a psychic to provide some supernatural entertainment for their final outing on the airwaves. At the same time, cash strapped mother Kate and her boyfriend Nick are venturing out into the country in search of solution to their financial woes, all the while a sadistic serial killer is terrorising the Welsh countryside and ghostly voices are heard on the radio airwaves.

The acting from the film’s cast is solid across the board, Siwan Morris as former singer turned DJ Laurie perhaps being my favourite, with her performance being great fun to watch. Full of scepticism and sarcasm for the supernatural; Laurie is a hard nut to crack, although this tough exterior is merely a shell for a broken woman beset by personal tragedy, which is expertly conveyed in a scene where she is playing her music for listeners.

Joanna Ignaczewska is also deserving of praise for the transformation that her character undergoes throughout the runtime. Beginning as a typical damsel in distress, she transforms into a bloody MacGyver, fashioning what was once a simple 4 armed wrench into a pseudo Swiss army knife, all purpose arse kicking weapon of awesomeness. This change does not only extend into her weapon making skills, as she also becomes a much tougher heroine, laying an almighty beating into our masked killer when he attempts to take her one on one. Ignaczewska is a likeable enough heroine and I did find myself rooting for her to succeed against the masked madman attempting to make her his latest victim.

The film is first and foremost a slasher film, complete with a masked murderer and a fair sized body count, although viewers who are perhaps sensitive may be turned off by some of the more violent scenes. One particular scene which made me cringe features a hammer and chisel having a very serious disagreement with a poor defenceless knee cap.

One problem though is the film’s shoehorned in supernatural element which in all honesty could have easily been removed and the film would have been no worse without it, with the main contribution of the supernatural being spooky voices on the radio and the occasional jump scare.

The film also takes a bit too long to get its main plot going after an effective opening, I don’t mind a slow burn horror film (I liked 2009’s House of the Devil which didn’t take off till the final 15 minutes) and the build up here does allow us to become attached to the characters, but still the time spent doing this could have easily been halved and it would have been fine.

The film is also not particularly scary, mainly relying on tried and test horror clichés of jump scares and gore to spook and revolt its audiences, so it doesn’t do anything particular original. But to the film’s credit it has a fairly neat twist that I did not see coming and left me feeling pleasantly surprised.

I’ll be honest; when I was given Dark Signal to review I was expecting to be disappointed by it or dislike it outright and was preparing to write a scathing review complaining about yet another clichéd slasher film. However I must confess that I actually enjoyed the film a good deal, it’s no masterpiece and it’s hardly groundbreaking in terms of horror cinema, but I can’t help but admit I had fun watching it, thanks to some solid performances and just a great horror atmosphere. So if you either get it on DVD or find it playing on the Horror Channel late one night (as I imagine it probably will be) check it out for a fun slice of British horror.