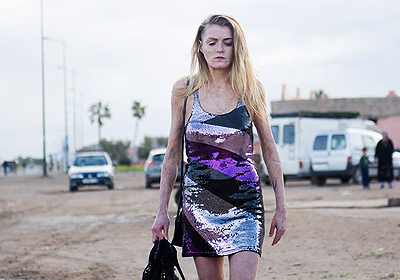 "A film to inspire, that does not solely focus on what it means to be a burns victim but also explores the subject of motherhood, and being young in today's society"

Dirty God is an unshrinking portrait of a determined young woman who faces a drastic change in how the public see her, after she is the victim in an acid attack.

Dirty God is director Sacha Polak’s first English language film, and as with Hemel and Zurich it adjusts the lens so that its focus is placed on 'the liberated woman’, and how her sexuality falls within that.

A film to inspire, that does not solely focus on what it means to be a burns victim but also explores the subject of motherhood, and being young in today's society.

Living with burns is not just about the operations you undertake, you after all at the end of it are still a person like everybody else; you hold desires, whether they involve going clubbing, or fulfilling sexual urges. Vicky Knight pours raw emotion onto the screen, in what is a most brave performance, nuanced in its style. The use of non-actors is not new, and given the current climate, “street-casting” could be a valuable mechanism for correcting an imbalance of class.

Directors that use ‘said’ mechanism include Ken Loach, Shane Meadows and Andrea Arnold, who cast Katie Jarvis in Fish Tank spotting her as she was arguing at a train station in Essex. “With non-actors you rely on their instinct.”  she said at the time.

“Often it’s things like the texture of their skin or the way they use language, things that they are not self-conscious about … all these things they don’t know they have,” said Ken Loach.

It’s one thing to cast an amateur who’s been through similar experiences, but quite another to then expect that person to live within a fictionalised character.

Whilst you mightn’t warm to Jade, whose a melange of stony/vulnerable, yet also seemingly uninhibited sexually, you cannot help but appreciate every element of her realness.

Her story should serve as a source of inspiration to everybody, disfigured or not. On the basis of the strength she retains alone. She is able to face life head-on again, even after the hardship that has befallen her previously.

Knight herself is a burns victim, however, the makeup department enhanced those scars she already had, in order that viewers could imagine more effectively the distress of a woman whose previous blonde good looks, in a conventional Western sense, are then suddenly scarred on a large scale because of her jealous-enraged ex-boyfriend.

We first meet Jade the day she comes out of hospital, picked up by her mother, Lisa. Lisa, played by Katherine Kelly, is fragile in her own way, and runs a black-market clothing company from her flat. On their arrival home Jade reaches out to cuddle her two-year-old daughter, Rae (Eliza Brady-Girard), but she becomes overwrought seeing her mother’s newly disfigured face, encased in a protective clear mask, even if temporary.

Rae's distress leads Jade to re-establish a friendship with bestie, Shami, (Rebecca Stone), but a night out serves as a cruel reminder of how difficult it's going to be for her to re-integrate into society.

Polak is particularly good at expressing the friendship that is held between the two girls. Shami is a bit of a clubber, and is only too willing to stick around so long as the fun holds out. And Naz (Bluey Robinson), her boyfriend, continues to entice Jade in, the sexual tension before the attack still very much in intact.

Jade now starved of attention, unable to rely on her physical attributes, resorts to chat forums but is careful not to let the camera slip, and show her face. It’s a release of sorts but is also humiliating, as she recognises her loss of empowerment.

Doctors tell her that little more can be done cosmetically, however, this doesn't stop her from being drawn to a Moroccan website, offering out affordable plastic surgery. Jade being strong-willed like she is, never lets the thought cross her mind that it may be a scam.

And to pay for the cost of the trip and surgery she takes on a job at a telemarketing company, whilst shrugging off, (as best she can), the stares and taunts of other colleagues.

The script makes a few false notes, here and there, but I think it is designed as such, in order that we ourselves believe the agency to be legitimate, thus emitting an an air of ‘false hope,’ after all the obstacles we've witnessed before it.

In terms of the cinematography Polak includes moments of marked tactility, for example, there's a scene in which Jade ports a nigab and spins around on the balcony outside her flat, displaying a confidence, at the same time remaining hidden.

There are also two nightmare scenes, both brief, where her attacker emerges sporting a collar of black cock feathers, I am intrigued to know how these may have been developed..

The camera work of Ruben Impens is delicate in how he chooses to cast light on Knight’s face and body, as well as create a clear division between the cold shades of England, and those warmer ones in Morocco. The Music is effectively employed by Polak's regular collaborator Rutger Reinders.