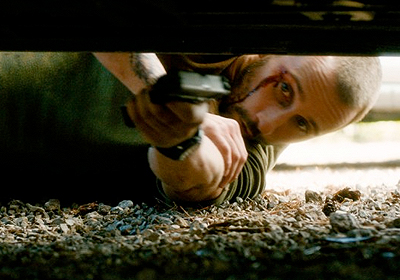 "a film where, like the lead character, so much lies under the surface. It has jolts of action and the tension of a thriller complete with some simple bad guys"

Disorder, the latest work by French director Alice Winocour, is an incredibly tense piece of cinema featuring a breathtaking performance by actor Matthias Schoenaerts. Dealing with the sensitive subject of post-traumatic stress disorder, it never preaches or explains, but provides us with the true reality of someone who is dealing with the after-effects of a difficult past.

The film follows a retired soldier Vincent (Schoenaerts) now working for a security firm and struggling with PTSD. Hired to protect a wealthy businessman’s wife (Diane Kruger) and young son, he unexpectedly finds himself caught up in international politics and a terrifying home invasion.

Belgian actor Schoenaerts is becoming steadily more recognised in international features, most recently in A Bigger Splash and The Danish Girl. A very understated actor, he often keeps his character’s emotions under the surface in a way that can be a hindrance in features where other showier performances take the limelight. Nowhere was this more clear than in Alan Rickman’s sweet directorial work A Little Chaos, where his lacklustre romantic scenes were lost in a film that was otherwise happily flamboyant and vibrant.

Fortunately, Disorder is a perfect film for really showcasing Schoenaerts' abilities. He embodies someone who is so broken, so close to exploding in anger, that he’s both intimidating and vulnerable. It’s a performance that has been made from the inside out, with every muscle of his face and body trapped in tension.

In fact, at one point Kruger’s character Jessie jokes that she could imagine him wrestling a bear in Canada. It’s made in a rare moment of relaxation and whilst Vincent shows a smile and laughs, it’s not hard to imagine his hulking figure being more than a match in anger and aggression for the wild animal.

With PTSD being a difficult subject, it is a film that carefully handles the illness. Although Vincent can often be a dangerous person to be around, being so entrenched in his disorder, we never lose sight of his humanity and wish to live a regular life. Jessie is afraid of him but she sees the kind man behind the mask of the trauma as well. It’s their complex relationship, where so little is said and so much is conveyed, that is an important highlight for the film.

Unfortunately, the film itself isn’t perfect. Although it’s stylistically filmed and the use of music is highly effective near the start, the morally corrupt characters of the background are cardboard cut-outs. Somewhere in there you think they might be trying to make a more general political message about international issues, but in the end it’s just a distraction from the human struggle of the main characters dealing with the effects of conflict.

Disorder is a film where, like the lead character, so much lies under the surface. It has jolts of action and the tension of a thriller complete with some simple bad guys, but ultimately the complexity of Vincent’s character and his ambiguous interactions with Jessie supply far more to consider long after the lights have come up.