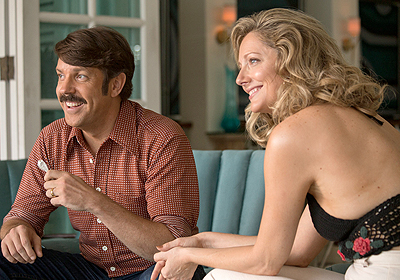 The story of John DoLorean is indeed an interesting one. A tale of glamorous homes, swarve parties and cheating the system is to be had, oh and cars; almost in a Wolf of Wall Street manner with a sprinkle of The Big Short instantly springs to mind when watching. Whether this is a good thing or bad thing that this is basically a replica of any businessman come crook representation ever is negligible. Nick Hamm's Driven is enjoyable and has moments of truly great performances, the problem is - it's just boring.

As we open in a courtroom, we know exactly where this is going; told through flashbacks and memories of Jim Hoffman played superbly by Jason Sudeikis, we are lead on a journey of politics, drugs and compulsive lying. Caught in an unbreakable net by the FBI, it’s no secret that Hoffman is placed in DoLorean’s way to essentially bring him down and exonortate himself from all previous convictions - a good deal as he sees it. Things start to get tricky and the lies consume this man virtually until he breaks. Cracks spring left right and centre into his new swanky life, but that’s what you get when dabbling in narcotics and frauds.

This has its fair share of laugh out loud moments married perfectly with healthy doses of drama pulling the narrative along until this man's inevitable comeuppance. The final throws are somewhat of an anticlimax and considering this is the crux of the story the weight simply isn’t there. The set-up is far more enjoyable to watch than the actual take down of this man, you yearn for something juicier, something you can sink your teeth into and we do get some brilliant performance within gorgeous sets and locations, yet the moment that the last 2 hours has been waiting for isn’t the showdown we all wanted. Of course, there is much more to the Doloeron story and this is by no means a serious biopic. The attention is diverted to the FBI agent who poured his life into taking the man down, when the man of the hour deserves a bit more than the one-dimensional representation we get from him with the occasional wink of an eye.

Above all else, Driven captivates from the opening scene. Actors from well known TV series pop up all over the place making you smile, albeit it completely loses its way in the middle chunk and since we all know how the story ends, the outcome falls flat on its face. It truly is a shame, as the likes of Pace, acting his socks off here is let down by pacing (no pun intended) and drab dialogue jam packed full of pauses and signs that stray from the story at hand.

From the writer of Murphy’s Law and man that brought us the fabulously cult The Hole, the bar is set rather high from the get go. Driven is an exciting prospect that never truly delivers. Perhaps if you are a car fanatic this would be better suited.