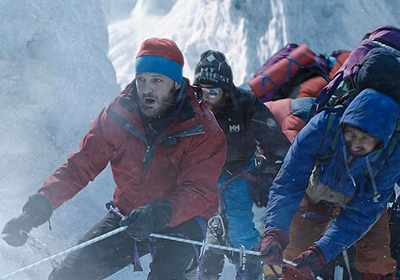 Director Baltasar Kormákur opts for a realistic venture into the tragic,gruelling climb of Everest rather than anything glamorously resembling Hollywood, despite its impressive ensemble.

The film opens modestly and, throughout it in fact, has a strong indie identity. Sure, we may have some stellar names in the cast, such as Jake Gyllenhaal, Robin Wright, Josh Brolin, Keira Knightley, John Hawkes, and Michael Kelly, yet it’s Jason Clarke (Dawn of the Planet of the Apes) that takes centre stage as expedition leader and respected living legend Rob Hall.

In keeping with this raw, indie approach, the action is surprisingly kept to a minimum: the true events over what happened on this fateful journey aren’t twisted, nor does it morph one of these normal, yet brave individuals into a hero archetype. In fact, the whole affair is rather low key, and has an almost constant gritty documentary aesthetic to it, even though it’s a retelling of a real story.

The shoot itself, and based on some of its awe-inspiring cinematography, appeared like a nightmare for its logistics, and the struggle of these trekkers really bursts through to whoever’s watching (preferably in 3D IMAX). You feel the cold, you imagine you’re there, and are all too aware of the life-threatening dangers that lie ahead.

It’s a competently made film, shot in undesirable conditions, but the cast make it look a lot easier than it probably was. However, disappointingly we don’t really get much insight into some of the characters, notably Gyllenhaal who, considering his recent efforts in Enemy and Nightcrawler, has very little to do and even less screen time as a result.

Likewise, the roles of the distressed wives at home who’re waiting to hear if their husbands are okay fall at the feet of Knightley and Wright – both talented actors who deserve a whole lot more to work with than mostly crying down a phone and looking sad in their warmth and comfort of their homes.

Everest won’t necessarily thrill in the ways Hollywood have tackled similarly themed disaster movies (notably Cliffhanger springs to mind), but it sure does pack a punch of emotion that’s perhaps far more valuable and definitely higher for poignancy alone. While each character isn’t allowed much time to develop, we somehow end up relating to and really connecting with them.

Perhaps it’s down to the no-frills attempt to get so many big names into the fray over such a short space of time without anyone appearing as ‘top dog’; Kormákur succeeds in crafting a believable story that remains true to its roots, without needing to manipulate the events and, indeed, his audience in order to get them fully on board.

Everest is a competent, worthy true story that, yes, under uses a majority of its talent, but forges a ‘bigger picture’ story of survival, tragedy and an exploration of the extreme nature atop one of the most notoriously difficult natural landscapes to conquer.