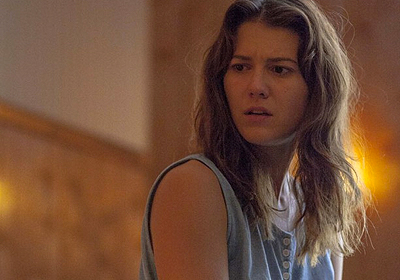 "a striking and memorable debut: unnerving enough to stick with you long after the end credits, with a subtle black humour that greatly adds to the film"

For years, the mysterious world of cults has fascinated and terrified people in equal measure. To those outside the tiny exclusive circles, we often see a group who have become shut off from the outside world and who have relinquished their old lives. Portrayals onscreen and in documentaries have long tried to discover just what the attraction is to those who join cults, yet it’s a difficult mystery to understand. For me, the best recent example has been in last year’s HBO drama The Leftovers. Set after a fictional religious ‘rapture’, the creation of a cult called The Guilty Remnant shows the way grief and guilt can create these strange groups. What writer and director Riley Stearns shows us in his debut feature Faults however, is just how much of the idea of cults is wrapped up with control- control over others, oneself or destructively losing control in a way that makes people vulnerable.

In Faults, Leland Orser (Taken, The Guest) portrays Professor Ansel Roth, a downtrodden writer who has devoted years to trying to return ex-cult members to larger society by recovering their emotional wellbeing and mindset. Broke, under pressure from his agent and haunted by some unsuccessful attempts at ‘deprogramming’ in the past, he reluctantly takes up a new project after the plea from a couple of desperate parents. The ex-cult member is Claire, played brilliantly by Mary Elizabeth Winstead (Scott Pilgrim vs. The World), and she proves to be a lot more trouble than Roth was ever prepared for.

For the most part Stearns shoots the film by placing the characters in the peach toned prison of a motel room, making the strained interactions between the very few people involved seem even more claustrophobic and tense. As we see the battle for power and control carry on between Claire and Roth, there is no escape for us from just how eery it is. Orser is excellent as the exhausted professor as we see him pushed to the limit, whilst Winstead is an utterly compelling screen presence. She gives Claire a pair of dead eyes that betray very little, turning her into the human embodiment of a cult by just how inscrutable she is.

What’s most striking about Faults though, isn’t just the intelligent plot or the actors performances but the black comedy that underlines such a serious subject. At times it’s genuinely darkly funny in a way that mercifully feels unforced, yet it still maintains a perfect balance with the disturbing psychological horror frequently on show.

Faults is a striking and memorable debut: unnerving enough to stick with you long after the end credits, with a subtle black humour that greatly adds to the film. It also handles the idea of cults in a new way by taking the film away from the epicentre of imagined activity in a group and focusing on the effect that it has on a single person. The small cast carries the full ninety minutes with utter ease and the two leads give truly standout performances. Faults is not an easy watch by any means, but it is undeniably compelling and marks Stearns out as a talent to watch out for in the future.