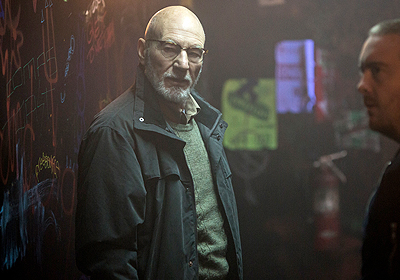 "a thriller that wants to impress the audience by adding violence to the story, but in doing so it goes a little overboard at times"

Green Room is a thriller with a splatter and horror twist that will take its audience by surprise. Set in the US, the film starts with an emerging anarchist heavy metal band travelling to play gigs and earn money. When one of the sessions booked doesn't seem to be as profitable as they hope, they get another show through a friend in a Nazi compound in the middle of nowhere, which is where the story really begins.

After a provocative live session, however, the band witnesses something really dangerous and, what at the beginning seems like a chance to make some easy money, literally becomes a matter of life and death.

At first, Green Room seems like a sedate movie about a heavy rock band trying to make it in show business, however, throughout the story the tone starts to shift progressively, turning the film upside down and into a thriller converging into violence with cruel and graphic scenes.

The colours in the film are dark and navigate towards every shade of green, however, instead of giving the audience a sense of peace and tranquility, while at the same time reminding them of the title and the purpose of a green room, the room in question becomes quickly associated with anxiety, claustrophobia and extreme slaughter.

The cinematography goes from static to frantic as the story spirals. While at the beginning there are more panoramic shots, towards the middle and until the end the scenes are all inside the warehouse and specifically in the green room.
The cast do a good job in portrayingtheir characters realistically; Patrick Stewart has the unusual role of the ruthless Nazi chief in charge of everything. Imogen Poots, Anton Yelchin, and Alia Shawkat work together distinctively, complementing each other and creating a well-harmonised performance in the midst of the chaos and brutality.

Particularly worthy of note is the female characters' courage, which stands out and brings a nice change in a genre where most of the time women are passive victims. Its plot is linear and it escalates in order to add more information, putting together pieces of the puzzle that create the whole story.

However, Green Room’s equilibrium is broken by the violence and gruesomeness of many scenes and this drastically changes the tone, startling the audience. Even the level of brutality escalates, going from mild to extreme within seconds. Green Room can be considered a thriller that wants to impress the audience by adding violence to the story, but in doing so it goes a little overboard at times.