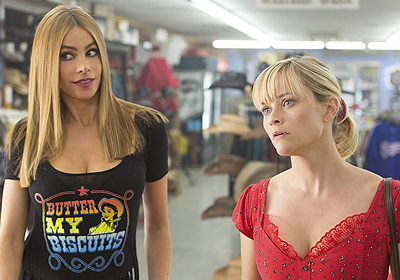 When Sofia Vergara meets Reese Witherspoon things are about to get seriously intense. Without having too many expectations, the trailer seemed fun, but the story seemed a bit overused.

Reese Witherspoon plays Rose Cooper, a not-so-tall female police officer who does everything by the book and who seems to have turned her job into her life. Sofia’s character is the complete opposite: Daniella Riva is a mob wife who, we are led to believe, is more preoccupied with her looks than what actually happens in her life. The two meet when Officer Cooper is selected to help escort the Colombian beauty to a safe place. However, everything takes a different turn and the two women end up buddying up and forming a team that seems to go against everyone and everything.

Director Anne Fletcher puts it very well when saying: “It’s something of a modern-day female ‘Odd Couple’ sort of buddy comedy.” Vergara and Witherspoon have an amazing on-screen chemistry that actually made me wonder for a few seconds if these roles would have suited anyone else. The “teeny-tiny” officer and the curvaceous wife seem to complete one another in a very different and comical way, presenting us with a sort of yin-yang combo.

It is true, the story line is regular and has been previously put into motion: Cooper wants to protect Mrs. Riva who’s running from a mobster who is behind her family’s assassination. To that you can add some dirty detectives, background story for each main character and a revenge plan. Also, some very high and sparkly high heels that seem to be more important than an arm, and some one-on-one lesbian action and you’ve got a plot.

Doesn’t sound that impressive, does it? Well you are in for a small surprise as the dialogue is very well timed and funny in most of the scenes. That and the incredible charisma both Reese and Sofia have. Actually, both of them were involved in the production of the movie, which seems to have worked.

“Hot Pursuit” is an upbeat, hilarious comedy in a very simple and direct way. Yes, it might have some lacks here and there, but I dare you not to laugh out loud and maybe then you will look at it much more in-depth and try to see it as more than it is: a perfectly pleasant comedy.