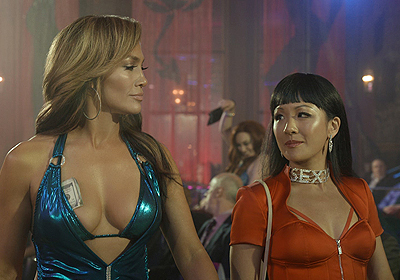 "seeks to cover female empowerment, sisterhood, relationships and friendships set within the context of the stripping world"

Hustlers is a film loosely based on an article published in the New York Magazine in 2015, the article entitled The Hustlers at Scores by Jessica Pressler is about a group of female strippers who scammed money from their clients.

This being the movie adaptation of the aforementioned article, the story is adapted, the characters have been changed and made more empathetic and likable, whilst still retaining the same underlying story of a group of women illicitly acquiring money from clients and randomly targeted individuals by various nefarious means.

Hustlers follows a group of women, who, through their own personal journey's have ended up working at a strip club, around the year 2007; overtime relationships and friendships are cultivated with the women all making a successful living working at the club. The film begins with their story being told in 2014 by one of the strippers Destiny (played by Constance Wu) to Elizabeth, a journalist (played by Julia Stiles) who is hoping to write an article on the scam and it's aftermath several years earlier.

Destiny is a single mother raised by her grandmother after being abandoned by her parents. Trying to make ends meet and wanting the best life for her daughter and her grandmother, she works in the strip club, just getting by. That is until, she taken under the wing of Ramona Vega (Jennifer Lopez).

Ramona is a seasoned stripper who knows all the tricks of the trade, she is also a single mother and is very well versed in making men dance to her tune. Acting as mentor and mother figure to Destiny she teaches her the ropes, and eventually a strong bond is formed between the pair and as a 'double act' they make a very successful living from stripping, building up a portfolio of regular clients who mainly work in the Wall Street area.

All seems to go well for a substantial period of time, however when the global financial crisis of 2008 hits it causes economic chaos and hardship. The strip club and it's employees were affected; the downturn caused hardships and unemployment due to less money coming into the club, which causes the women to fragment and go their separate ways, some leaving the stripping industry behind altogether.

For a short period, Destiny begins a new relationship resulting in her having a child, but the relationship between her and her daughter's father fails, thus forcing her back into the world of stripping. However, she learns that because of the economic environment there's very little money left to be earned from the job now. While at the club she runs into Ramona who still seems to be successfully earning money. Ramona shares her story and scheme for earning money in these hard times and so begins the journey leading to great wealth followed by an eventual criminal downfall.

Hustlers is a fictionalized account of events based on the aforementioned article that seeks to cover female empowerment, sisterhood, relationships and friendships set within the context of the stripping world, later leading to criminal activity. All the female actors give great performances, although some of the cast could have been more material to flesh out their characters.

With the film's screenplay written by Lorene Scafaria and directed by her you get female characters you can emphasise with, within what is certainly a female driven film. That and the casting should be praised, especially with the Constance Wu as the lead actor, the kind of casting which is rare for Hollywood.

That being said there are no male characters that envoke any kind of sympathy or play a significant part in the film; which doesn't take away from Hustlers being an entertaining, funny, thought provoking film and earns itself three and half stars.