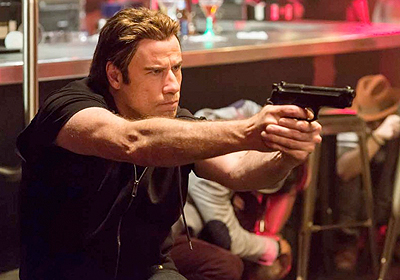 The career of John Travolta is a strange one. Beginning in the 1970s with classics such as the disco fest of Saturday Night Fever and the colourful musical Grease, through to his career downturn in the 80s, before regaining the spotlight in the 90s thanks to his performance in Pulp Fiction. However, many would argue that he well and truly ruined his career by starring and producing the abhorrent Scientology inspired turd Battlefield Earth, a masterpiece of awful that he has struggled to recover from ever since. Today’s film the revenge action drama I Am Wrath is an attempt by Travolta to join the recent trend of middle-aged action heroes, popularised by films like the popular Taken series. Except the main difference between Taken and I Am Wrath, is that the former is at least entertaining.

The plot follows Stanley Hill (played by Travolta) who’s grief stricken by the murder of his wife in a mugging and enraged by the lack of justice being doled out to the killers. He decides to take the law into his own hands. Re-uniting with an old friend from his past in the Special Forces, Stanley uncovers a plot revealing that his wife’s murder was much more than a random act of violence and in fact is connected to a much larger conspiracy involving a partnership between criminals and those with political power.

The plot has been done a thousand times before; had this been made in the 1990s you can be certain that it would have starred Steven Seagal fighting his way across the screen. John Travolta is horribly miscast in the lead role as a former Special Forces operative, he’s just not intimidating, but you’d think he could make up for his lack of an imposing nature by delivering a good performance. Obviously no one told him that, because his performance is lifeless and delivered in a half-hearted manner, displaying none of that charisma that made him a star all of those decades ago.

The lead should have gone to Christopher Meloni (of Law and Order: SVU fame) in the role of Travolta’s former brother in arms. Meloni performs the role with a degree of likeable charm and enthusiasm, cracking wise and attempting to engage in buddy-esque banter with the wooden Travolta. He is also noticeably fitter than Travolta, which proves handy when the film’s attempts at action sequences kicks off, with Meloni performing the gun battles and fight scenes with a greater sense of authenticity.

The film’s supposed to be an action flick, and they are supposed to be exciting, right? Well the makers of this disagree with that idea. The action scenes are short-lived, repetitive and all round boring. It’s effectively the same two minute gun battle over and over again, with the odd bit of fisty cuffs in between. The film’s best action moments come from Meloni, like when he effortlessly defeats a group of armed thugs while he himself is unarmed, breaking a baseball bat on his leg, before comically berating the thug for making his leg hurt. However, these small moments of decent action are far and few between, and the whole thing is simply a chore to sit through. I found myself counting the minutes until I could stop watching.

I Am Wrath is without questions, one of the worst action films I’ve ever watched. It suffers a clichéd plot that has been made countless times before and has been done better. It’s suffers a dull turn from Travolta, who must be praying that Tarantino will put him in another film to again resurrect his career. Its action scenes are boring and repetitive, with very little excitement injected into proceedings.

Quite simply, I Am Wrath is just an awful film. Avoid it at all costs and leave it to gather dust in the cinematic purgatory that is the DVD bargain bin.