In the Heart of the Sea(2015) by Denisa Niculescu 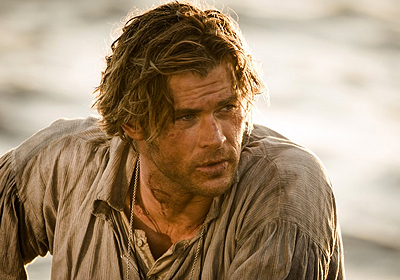 Moby-Dick is a book of fiction, however “In The Heart Of The Sea” is the story which provided the inspiration for Melville’s novel. The plot of the film is based on a book written by author and historian Nathaniel Philbrick and it addresses the tragedy that took place on the Essex in 1820.

The action of the film begins 30 years later, when we get to witness the visit Herman Melville (Ben Whishaw) pays to the now last surviving man who was onboard the Essex; Tom Nickerson, who is played by two actors. The narrator and the one to recall all the events, is the one we are introduced to in the beginning. In his hesitance to share his memories you can see the extent to which that experience has affected him.

Veteran actor Brendan Gleeson is the one that portrays a still scared and traumatised Nickerson at that moment in time. The younger version is brought to life by Tom Holland, and he presents us with a slightly hesitant, but still somewhat excited 14-year-old boy who goes to sea for the very first time. We get to witness the interaction between Melville and Nickerson a few times, as the movie goes on, and the hunger Melville has in those sequences, in regards to the story, is very clear.

Once Nickerson starts his story we get to meet the rest of the crew of the Essex; Owen Chase (Chris Hemsworth) is selected as First Mate, even if previously promised a captain position. He is a skilled whaler who has more than once delivered huge amount of oil, however, destiny was always a bit against him as he wasn’t born to the type of family which would help with his ascent. Chase is just, noble and charismatic, he knows how to handle the crew and he is sort of a pillar of the team. However, the need to prove himself sometimes blinds him. Chris Hemsworth, the one to draw the attention to the story of the Essex ship, portrays him skilfully and helps the audience to know Chase at a profound level.

The one to be chosen as the ship’s captain was George Pollard (Benjamin Walker). Pollard is faced with another type of pressure, that of proving himself. The Essex was the first ship he got to command and he is often hit by his own doubts. Benjamin Walker presents us with a strong character, very secure of himself when it comes to relating to others, but burdened on the inside. His character ends up discovering himself and what he stands for, by the end of the story.

Of course, the interaction between Owen Chase and Captain Pollard isn’t the nicest one; the friction between them is very clear and emphasised multiple times as the story develops. Both of them believe they are right and both are too stubborn to admit otherwise. This however makes the job of Second Mate Matthew Joy (Cillian Murphy) a more difficult one. This experienced sailor, he’s been sailing with Chase since they were 13, has to try and keep the balance so that the ship can actually work.

Another great part of the story is the actual whale. Being way bigger than the rest of its brothers and sister helps their situation as it allows it to act as sort of a bodyguard. The story, which was proclaimed as a man against nature one, actually has more than one side. There is a certain David and Goliath to it, however this gets reversed at one point. If initially we feel sorry for the whales, later on we start to feel sorry for the crew as the situation turns against them.

However, this is only one of the fights they have to go through. There is also a man against himself side to the story. After the attack they are stranded at sea, with a huge whale still following them, trying to survive without the proper supplies. And bear in mind we are not talking a week or two, but almost 3 months at sea, in a tiny boat, under the heat of the sun and with barely any food or drinkable water with them. It is the kind of tragedy which changes you and shapes the future so differently from what you were expecting. Those trials allow us to see the strength of the human spirit and its incredible will to survive.

In The Heart Of The Sea is a very visual story, from costumes to the huge storm on sea and to the incredible 95 foot long whale. It is also visually striking in regards to the physical changes the members of the crew go through and the process of catching the whales. If you expect the adaptation of the Moby Dick novel, you will not get it. However, In The Heart Of The Sea can stand on its own two feet and it will present you with a breathtakingly powerful story.