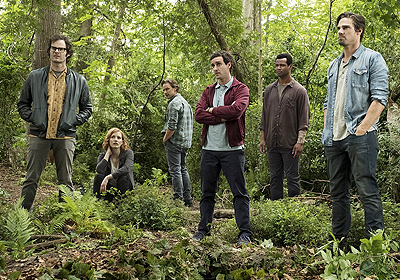 "Having set a high bar with the first film IT and the cast of teenagers giving great performances, combined with a level of tension and fear exhibited in the film following that with IT: Chapter Two was going to be a challenge"

IT: Chapter Two is the follow-up to the 2017 hit film IT, which went on to become the most financially successful horror film of all time. The original film told the story of a group of teenagers (collectively calling themselves the Loser’s Club), from the town of Derry, Maine (in the USA) who fought and defeated a shape-shifting creature.

As the story picks up we learn with the exception of Mike Hanlon (played by Isaiah Mustafa), who is now the town librarian, the rest of the Loser’s Club have gone their separate ways forging careers and lives leaving behind their hometown of Derry.

Through a brief series snapshots of their current lives we learn where each one is in terms careers, relationships, general well being and happiness etc. However beyond that, no great depth is gone in to explaining what's happened in the proceeding twenty seven years and how each of the characters arrived at their current state of being.

This is left to the viewer to make the link between the characters as teenagers from the previous film to the adults in the current film. Although at serval points flashback sequences are used for the adults characters to try and create a story arc and a framework of reference linking them to their teenage counterparts.

Back in Derry, Mike begins to become aware that the evil of the past in the form of Pennywise may have returned and so he begins to contact each of members of the Loser’s Club asking them to return to Derry remembering an oath they had taken when originally defeating Pennywise; “Swear...swear if It isn't dead... if It ever comes back... we'll come back, too.”

After the group are reunited, Mike explains to them that he has been researching and studying as much about the creature as he can and has discovered a way that will allow them to destroy it permanently. Spurred on by this knowledge they are ready to face Pennywise again...

Having set a high bar with the first film IT and the cast of teenagers giving great performances, combined with a level of tension and fear exhibited in the film following that with IT: Chapter Two was going to be a challenge to repeat or better, of which neither IT: Chapter Two does. It's not a bad film, it's just not in the league of it's predecessor.

It's failings lie within, for one thing, the film is too long, for another, there aren't enough of links established between the characters as adults and their teenager counterparts; even though there are multiple flashbacks from present day to the past to try and rectify this, it just doesn't seem to work. Also the younger actors were given greater character arcs and room to develop which the older cast aren't given, even though technically they're playing the same characters as the teenagers. However because of this the teenagers become more relatable and I'd go so as to say they shine above the adults with their portrayal of the characters.

Another failing is that after a promising start the film fails to be scary, instead it devolves into a comedic farce with the odd jump scare peppered in and special effects become the order of the day.

The film also feels hollow because not much is happened to the characters, Pennywise or the town of Derry in the proceeding twenty seven years is explored. Overall the film feels like a mixture of different elements that doesn't actually gel and the result is just a average film. Leaving in it's wake a great first part in IT (2017). Thus this only warrants two and half stars.