IT: Chapter Two (ScreenX)(2019) by Jonathan Hughes (The Killer Spotlight) 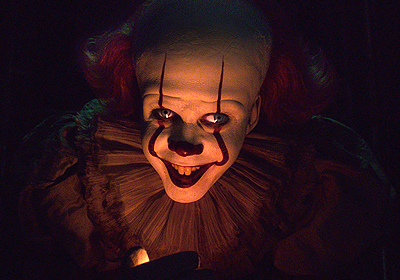 I was very impressed with 2017’s adaptation of IT, with all it's 80's nostalgia and FANTASTIC performances from all the young actors and the amazing Bill Skarsgard as Pennywise which gave me the same vibes I had when I saw Heath Ledger as The Joker in The Dark Knight. But that's our first trip to Derry, Maine, did this all hold up in Chapter Two though?

Mike Hanlon reunites The Loser’s Club to kill Pennywise after the dancing clown returns twenty seven years later after the events of the 2017 adaptation of Stephen King’s infamous tome. Only problem is that the rest of the club have vague memories of those events until they return to Derry and realise the terror they have to face. They at first want to run back to their “happy” lives but are eventually convinced to team up. They just need to go grab a few nostalgic items which are needed for a ritual to defeat Pennywise. But throughout their journey they are once again tormented by Pennywise and his sadistic games, with the addition of a few blasts from the past that are determined to prevent the Loser’s Club from reaching their goal. Each member of the club are faced with challenges not only from Pennywise but from within themselves which they must overcome if they are to break the Derry curse.

This was meant to be the paragraph where I complain about the movie being too long and how it drags the movie out a bit but when I come to terms that this is based on a celebrated Stephen King novel and that Director Andy Muschietti has indeed fulfilled his purpose of making a GREAT adaptation of one of King’s greatest stories. This journey that the Loser’s Club embark on is about burying the pains of the past and looking onwards with the loved ones that they have obtained on their journey. It's a very emotional movie at its heart about love, friendship and facing your fears head on.

One thing that has stood out in BOTH movies is the INCREDIBLE score by Benjamin Wallfisch in which he brings a blend or majestic fantasy and innocence one minute and pure dread and danger the next. I do hope he gets to score more movies in the very near future. Great performances  (as always) from James McAvoy and Jessica Chastain but the REAL Standout performance has to be Bill Hader as Richie Tozier who has the funniest and arguably the best lines in the movie. I would be an idiot to not mention Bill Skarsgard stepping up once again as Pennywise who is so terrifying throughout.

Despite the dragged out feel I had watching this, overall IT: Chapter Two is intentionally long to show how the characters have evolved and how vulnerable they can still be plus we get a lot of great flashback scenes with the young Loser’s Club which certainly puts this movie back on the plus column for me plus the suspense and horror throughout.