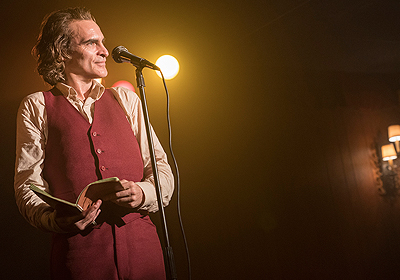 Let’s get the obvious out of the way immediately, whilst this film is essentially a comic book movie this is not your standard superhero affair. There are no super powers, no larger than life heroes in this story, what we have is the portrait of an essentially good man, albeit one who suffers from mental illness as a result of prior abuse, descending into madness and becoming someone much more chilling and ruthless than could be imagined. This is not your fairy tale with a happy ending…

Now why have I chosen to start in this manner? Well the Joker as a character is a very complex one, although being inspired by a character from the Golden Age of Cinema (The Man Who Laughs) we have never been given a definitive back story to the Clown Price of Crime.

In the lead up to the release of this film, details were kept someone thin on the ground in an effort to capitalise on this sense of mystery. With this in mind, heading into the screening I was optimistic yet guarded as to how the plot would play out, would having a backstory taint one of the most famous villains? Or would it further advance a deep and encompassing lore.

The main thing to note at this time is that (so far) this interpretation is not linked to any previous film version of the character and acts as a standalone take on the infamous character, and whilst there are no connections now, it would not be surprising to find out that this ties in with the upcoming The Batman.

The overall plot owes to two main sources; this being The Killing Joke, which is often sighted as one of the best Joker stories ever published and the other being The King of Comedy which seems to heavily inspire the bulk of the plot. If these two sources seem like unlikely starting points then you would be right, however the mash up of them both is somewhat compelling and makes a great if sometimes uncomfortable watch.

Joaquin Phoenix gives one of the best performances of his career here, which given Walk the Line and the near universal praise his performance was given is saying a lot.

His character Arthur Fleck begins as an unassuming, kind and sympathetic person, before hardship, betrayal and his spiralling mental illness twists him into the universally known and feared Clown Prince of Crime.

To give away specific plot details would be to do anyone wishing to see this film a disservice, but during Arthur’s descent into who he will become there are some truly brutal and eye opening scenes. The supporting cast are no slouches either, including Robert De Niro as Murray Franklin the Late Night Talk Show host which has Arthur appear as a guest, Zazie Beetz as Sophie Drumound the quasi love interest and lastly Frances Conroy, likely most well-known to the average viewer for her roles on American Horror Story.

Another notable mention needs to be given to the soundtrack, the exact date of our setting is never given but you’re lead to believe that it’s the late 60s/early 70s, the soundtrack helps to keep this tone and is fantastic,  minus a track by Gary Glitter.

Overall though Joker is an amazing film to experience even though it’s possibly not the masterpiece it may have set out to be, the film feels like an experience although time will tell if that’s an experience you will want over multiple viewings.

This is a solid 4 out of 5 stars which likely may be appreciated more over time, and proof that a more indie psychological appreciation to comic book characters can be done well.